Days of Our Lives Spoilers: Kayla’s Romantic Evening With Justin – Moves On From Steve, With New Beau Now

BY hellodrdavis on November 9, 2019 | Comments: one comment
Related : Days of Our Lives, Soap Opera, Spoiler, Television 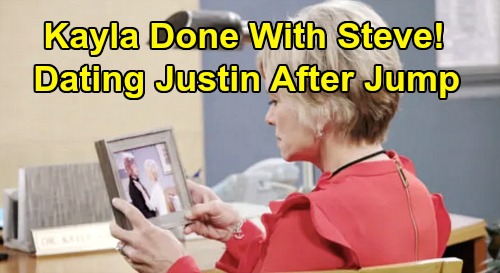 Days of Our Lives (DOOL) spoilers tease that viewers will have several surprises when things pick back up after the time jump that occurred on Friday, November 8. As DOOL viewers know, on Friday’s episode, Jack Deveraux (Matthew Ashford) told a suddenly awake Jennifer Deveraux (Melissa Reeves) that she had been in a coma for a year. Now things will pick up on Monday, November 11 and a year will have gone by in the lives of all the Salem residents that we know and love.

And for one Salem resident, there will be a major relationship status change. According to DOOL spoilers, Kayla Brady (Mary Beth Evans) will head home for a romantic evening with her new beau on the episode scheduled to air on Friday, November 15. That means that Kayla will no longer be waiting for Steve Johnson (Stephen Nichols) to return home from his big mission with the ISA, and she’ll have decided to walk away from Steve and take up with someone new.

This is a huge development, since Steve and Kayla were a major DOOL super couple. But viewers will remember that before the time jump, Kayla was getting to her wit’s end waiting for Steve to come home. He was taken into custody back in 2018 after the “bionic eye” technology that Kayla got from Stefan DiMera (then played by Tyler Christopher) was detected recording top-secret information. That got Steve hung up on treason charges, but he was later cleared.

However, from there, Steve went off with the ISA on a mission, which turned into a long-term stint off-screen. Well, it seems that Kayla must have finally got tired of waiting for Steve and decided to move on. But did she actually divorce Steve, or are the two perhaps separated at this point? Viewers will have to wait to find out these critical details.

There is, however, DOOL buzz suggesting who Kayla’s new beau may be. It seems that she may be paired up with Justin Kiriakis (Wally Kurth), which may leave some viewers scratching their heads, since Justin just married Adrienne Johnson (Judi Evans) on the show. But since a year will have gone by due to the time jump, it seems that Justin will be single after that year.

Sadly, it appears that Adrienne will be gone permanently, as she will have died during the time jump year. Exactly how that will have happened remains to be seen, but viewers should eventually see how this all transpired via flashbacks and some creative storytelling by TPTB.

At any rate, it seems that Justin and Kayla will be a couple when things pick up after the time jump, and it really makes sense, given that there’s really no one else on canvas who’s around Kayla’s age and who will be single after the time jump. Of course, as you might already know, Steve will be returning to Salem on November 27, so that should make for an interesting situation and some sure-fire tension between Steve and Justin.

Now, whether Steve has come back to Salem to reclaim his Sweetness remains to be seen. It seems that he’ll be back for a big case with John Black (Drake Hogestyn), but he may have every intention of getting Kayla back, too, and that could bring with it some big drama! Of course, just how long Kayla has been with Justin at that point remains to be seen – they could have a relatively new thing going, or they could have been together for several months.

At any rate, it looks like there’s going to be a new DOOL triangle brewing, and something tells us that Steve won’t be too happy with the situation he finds at home. But then again, he stayed away for over 2 years when you factor in the time jump, so he couldn’t expect Kayla to wait around forever, right?

Are you looking forward to seeing the Steve-Kayla-Justin love triangle? Stay tuned to DOOL and don’t forget to check CDL often for the latest Days of Our Lives spoilers, updates, and news.