Days of Our Lives Spoilers: Kristen’s Attack Leaves Stefan and Gabi Unconscious – New Hostages Have Chance to Kiss and Make Up 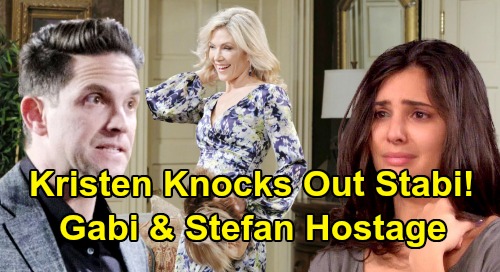 Days of Our Lives (DOOL) spoilers tease that Stefan DiMera (Brandon Barash) will trade one problematic situation for another one. DOOL fans know Stefan’s faced some difficult blows lately. Thanks to Kristen DiMera (Stacy Haiduk), Stefan was accused of kidnapping Ted Laurent (Gilles Marini) and Kate Roberts (Lauren Koslow). That led to him being dethroned at DiMera Enterprises and paved the way for Gabi DiMera (Camila Banus) to get her revenge.

Of course, Stefan is now facing murder charges after getting caught with the gun used to kill Ted. It looks like Stefan will either be cleared, escape or somehow make bail again. Whatever the case, his freedom won’t turn out to be a good thing. Days of Our Lives spoilers say Kristen will strike once again. At the DiMera mansion, she’ll manage to knock Stefan and Gabi out cold!

There’s no word yet on how Kristen will pull this off, but smacking people in the head is a favorite pastime of hers. That tends to be the quickest and easiest path to incapacitating her victims. Whatever the case, Gabi and Stefan will be down for the count. Days spoilers state that Kristen will drag them around and realize she’s dealing with another mess.

However, Kristen will figure this out. She’s a born problem-solver! Days of Our Lives spoilers say this could be a prime opportunity for Gabi and Stefan to make up. Will they be the next hostages – either in the DiMera tunnels or another location of Kristen’s choosing? It might be best to go with the latter since that secret room isn’t much of a secret anymore.

Regardless, Days spoilers say Gabi and Stefan could have some serious time on their hands soon. Maybe they’ll learn too much and get locked up by Kristen. After the chaotic scenario with Ted, Kristen may not be keen on killing them. Stefan and Gabi might be forced into close quarters, where they could be honest about their lingering feelings and put Gabi’s betrayal behind them.

Will Gabi and Stefan find a way forward? Will they ultimately kiss and make up? It sounds like some fun “Stabi” drama’s ahead. We’ll give you updates as other Days news comes in. Stay tuned to DOOL and don’t forget to check CDL often for the latest Days of Our Lives spoilers, updates and news.