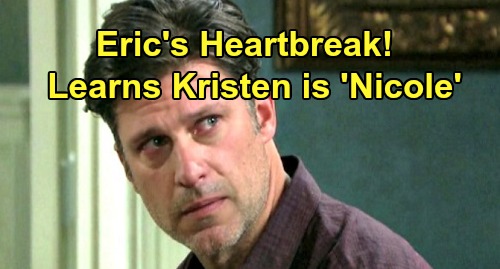 That should naturally infuriate Eric all over again. He was already mad after Brady revealed he was a witness to “Nicole” and Tony DiMera’s (Thaao Penghlis) marriage, so this will rile Eric up even further.

However, Eric has found love with Sarah Brady (Linsey Godfrey) – soon-to-be Sarah Horton again after she ends that pesky marriage to Rex Brady (Kyle Lowder). She knew Eric was “the one” when she tied the knot with Rex, but she never thought she had a chance. Nicole is the love of Eric’s life, so Sarah initially thought “Ericole” would get through this rough patch and make it work.

Fake Nicole Walker Will Be Exposed As Kristen DiMera Soon

Of course, DOOL fans know “Nicole” isn’t quite herself these days! Kristen DiMera (Stacy Haiduk) is posing as Nicole through that incredibly realistic mask. That brings us to Eric’s next shocker.

Days of Our Lives spoilers say Kristen is set to be exposed soon. It looks like the big reveal will happen at John Black (Drake Hogestyn) and Marlena Evans’ (Deidre Hall) anniversary party.

The good news is Eric will realize Nicole doesn’t hate his guts. The bad news is he’ll once again believe Nicole is dead. Every bit of joy and relief Eric felt will be gone in an instant. He’ll have Sarah to lean on, but she’ll be reminded of how much he loves Nicole. Sarah may sense that Eric will never truly be able to put Nicole behind him.

Eric Brady Obsessed With Finding Out If Nicole Walker Is Alive

Days of Our Lives spoilers say Eric may plunge back into darkness due to this revelation. How will Sarah handle that? She’s gearing up for a bright future with Eric, but things will take a gloomy turn thanks to this Nicole drama. Even if Kristen knows where Nicole is and has kept it a secret, that may not be something she wants to divulge. Kristen might want Eric and Brady to suffer after all this blows up.

In an effort to relieve his grief, Eric might become obsessed with finding out if the real Nicole could possibly be alive. He may be on a mission to find the truth, which would obviously leave Sarah deeply dismayed. Rex said he hoped Eric doesn’t break Sarah’s heart, but that certainly seems destined to happen.

It sounds like Sarah and Eric’s bliss won’t last long! We’ll give you updates as other Days details emerge. Stay tuned to DOOL and don’t forget to check CDL often for the latest Days of Our Lives spoilers, updates and news.