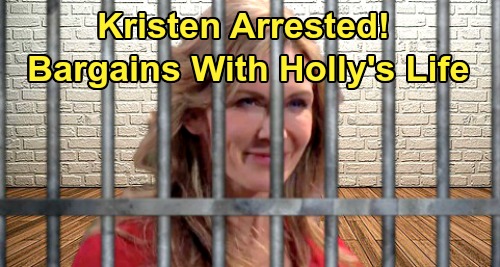 Days of Our Lives (DOOL) spoilers tease that the jig will soon be up for Kristen DiMera (Stacy Haiduk). The walls will close in during the week of August 19-23, so Kristen had better be prepared for backlash. Gabi DiMera (Camila Banus) will catch onto to Kristen’s plan, but that’ll be the least of Kristen’s problems. The real chaos will strike at “Jarlena’s” anniversary celebration.

John Black (Drake Hogestyn) and Marlena Evans (Deidre Hall) will hope to have fun with their loved ones, but it’ll all go horribly wrong. Days of Our Lives spoilers say a huge secret will be revealed at this gathering. There’s a good chance it’ll involve Kristen’s scheme to pose as “Nicole.” She may be unmasked in a very dramatic fashion, which could certainly bring some exciting DOOL scenes.

The excitement will rev up even further after Kristen whips out a gun and threatens to shoot Marlena. Nevertheless, Marlena may be spared this time around. That woman has had far too many comas and deadly scares! Let’s hope Days cuts Marlena a break and lets her get by unscathed at this bash.

As for Kristen, there may be no escaping police custody. Eli Grant (Lamon Archey) will be stunned when he hears Kristen is alive and wreaking havoc. He’ll leap into action and hope to protect the people of Salem, especially the people Kristen would specifically target.

Days of Our Lives spoilers say Kristen’s arrest may be looming, but what happens after that? Could Kristen have one final trick up her sleeve? We can’t forget that Kristen’s got a useful bargaining chip here. She knows where an alive Holly Jonas (Harlow and Scarlett Mallory) is, but she may not cough up that info without a sweet deal.

Of course, Xander Cook (Paul Telfer) could be a bit of a wild card. It’s possible he’ll divulge Holly’s location and cause Kristen to lose her leverage. However, Xander would much rather keep his involvement under wraps. He might worry Sarah Brady (Linsey Godfrey) would never forgive him for faking a child’s death and letting her loved ones suffer, especially Maggie Kiriakis (Suzanne Rogers).

Days spoilers say Kristen will land in a tight spot, so she’ll be looking for a way out. Could she cut a deal in exchange for info on Holly? Will that be Kristen’s ticket out of trouble – at least some of it? We’ll give you updates as other news comes in. Stay tuned to DOOL and don’t forget to check CDL often for the latest Days of Our Lives spoilers, updates and news.