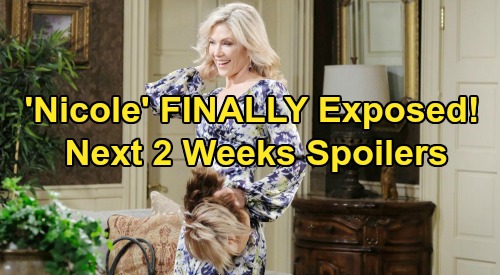 Days of Our Lives (DOOL) spoilers for the next two weeks tease that the action’s about to heat up in Salem. During the week of August 12-16, John Black (Drake Hogestyn) will be recruited for Hope Brady’s (Kristian Alfonso) mission. She’ll need some assistance she works to find Ted Laurent’s (Gilles Marini) killer.

Elsewhere, Will Horton (Chandler Massey) and Sonny Kiriakis (Freddie Smith) will ponder some clues. They’ll investigate Xander Cook (Paul Telfer), who’ll end up making a deal with Hope and John later in the week. Xander can’t reveal everything without making serious trouble for himself, but he’ll still try to spin this situation in his favor somehow.

Meanwhile, Ben Weston (Robert Scott Wilson) will step up for Stefan DiMera’s (Brandon Barash) sake. He’ll do his best to crack the case of who killed Ted, so Ciara Brady (Victoria Konefal) will offer to help. After rummaging around “Nicole DiMera’s” (Arianne Zucker) room, Ben and Ciara will be forced under the bed. They’ll be stuck down there while a shady deal goes down just above them.

Kate Roberts (Lauren Koslow) won’t want anyone to know about her agreement with someone evil. That someone will likely be Kristen DiMera (Stacy Haiduk), so “Cin” may realize Kristen’s alive and has an agenda. Over with Gabi DiMera (Camila Banus), she’ll fly into a rage during a confrontation with “Nicole.” It looks like the fight will put Gabi’s attention on the edge of “Nicole’s” mask.

Days of Our Lives spoilers suggest Gabi will try to rip it off, but “Nicole” will put up a fight. Their nasty showdown will lead to Gabi getting knocked out cold – and Stefan will end up knocked out, too. During the week of August 19-23, Gabi and Stefan will accept that their feelings are real. Perhaps Kristen will have them locked up, which could force them to work through their issues.

However, Kristen’s secret will remain in jeopardy. Days of Our Lives spoilers say John and Marlena’s (Deidre Hall) anniversary party is coming up. A major DOOL bomb will drop at this gathering, so it seems that’ll be when “Nicole” is finally exposed as Kristen. After fantasizing about shooting Marlena the week before, Kristen will pull a gun on her enemy and be tempted to do it for real!

Other Days spoilers say Brady will come clean to Eric Brady (Greg Vaughan) about getting back together with “Nicole.” That should bring more tension, but Kristen’s crazy stunt should change everything. A furious Brady will demand answers later, so Kristen may lay all her cards on the table and hope for a true reunion.

Days fans can expect Eli Grant (Lamon Archey) to be floored over this Kristen news. Salem will be buzzing as danger erupts! We’ll give you updates as other DOOL details emerge. Stay tuned to the NBC soap and don’t forget to check CDL often for the latest Days of Our Lives spoilers, updates and news.