Days of Our Lives Spoilers: New DiMera Queen Gabi Kicks Stefan to the Curb – Kristen Down But Not Out, Plots Bold CEO Strategy 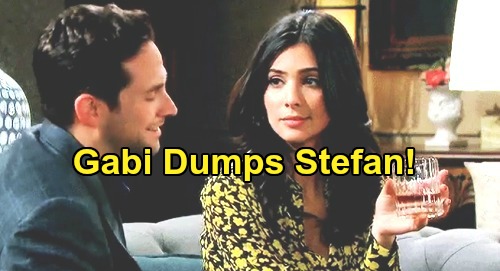 Days of Our Lives (DOOL) spoilers tease that Gabi DiMera (Camila Banus) will get everything she wanted. After emerging victorious in the CEO war, Gabi will take the DiMera Enterprises throne and promptly kick Stefan DiMera (Brandon Barash) to the curb! Part of her won’t want to give up the spark she’s found with Stefan, but she’ll determine that she just can’t bail on her plan – not yet anyway.

DOOL fans know Gabi’s awfully stubborn, so she’ll dig her heels in and focus on her original scheme. Meanwhile, “Nicole DiMera” will fume over her own failed plot. Kristen DiMera (Stacy Haiduk) was really hoping this whole Tony DiMera (Thaao Penghlis) marriage idea would work. She’ll be frustrated by the outcome of her battle with Gabi, but she’ll be prepared to go another round with her.

Days of Our Lives spoilers say Brady Black (Eric Martsolf) will fill “Nicole” in on Gabi’s true agenda. He’ll point out that he inspired Gabi to go after Stefan and take him for everything he’s got. Gabi stuck with it longer than Brady expected in the end. He may be sorry for his part in “Nicole’s” failure, but she won’t blame him. In fact, Kristen may even admire Brady for coming up with something so sneaky.

However, “Nicole” will remain unimpressed by Gabi and her ability to run the company. She won’t trust that Gabi has the skills necessary to do the job. Even if Gabi did, Kristen wants to make DiMera Enterprises her baby. She’s ready to move forward with a takeover, so she’ll brainstorm strategies to back Gabi into a corner and force her out.

Days of Our Lives spoilers say “Nicole” will be convinced she can outmaneuver Gabi. She manages to outmaneuver almost everyone else, so she won’t see this being a problem for much longer. Nevertheless, “Nicole” will assure Brady that none of this will matter without him by her side. She’ll try to make Brady see that they have to run the world together or else she won’t be fulfilled.

Brady will finally accept that “Nicole” wants him and is putting Eric Brady (Greg Vaughan) behind her. He’ll sink further into “Nicole’s” dangerous web, so perhaps Gabi should be fearful of the double threat that’s brewing! Then again, Days spoilers hint that Gabi may be her own worst enemy. Her feelings for Stefan may be her true downfall soon enough.

It looks like some hot drama’s ahead on the NBC soap. We’ll give you updates as other Days news comes in. Stay tuned to DOOL and don’t forget to check CDL often for the latest Days of Our Lives spoilers, updates and news.