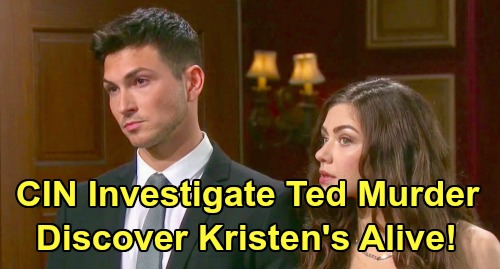 Days of Our Lives (DOOL) spoilers tease that Stefan DiMera (Brandon Barash) will be a man with a plan. He keeps finding himself in terrible situations, but he’ll hope to turn things around with some help from Ben Weston (Robert Scott Wilson).

Stefan doesn’t trust the Salem PD to seek true justice. He feels like he’s already been convicted in the cops’ minds, so he’ll have to handle the matter on his own.

Ben will play a huge role in Stefan’s efforts. DOOL fans know Stefan and Ben have formed an interesting bond. They’re not exactly best buds, but they do understand each other – mainly due to their mutual town pariah status.

During the week of August 12-16, Days spoilers say Stefan will be grateful for Ben’s loyalty. He’ll push Ben to do some digging for him and hopefully crack this case. Stefan will explain his version of events and trust that Ben will believe the true story. He simply got caught holding the murder weapon; Stefan certainly never pulled the trigger.

Days spoilers state that Ben will agree to kick off an investigation. He’ll try to find out who really killed Ted, so Ciara Brady (Victoria Konefal) will naturally pitch in. She can never stay away from Ben for long! Besides, Ciara’s got some pretty good sleuthing skills. Two heads are better than one, so Ben should get on board with his girlfriend’s contribution. He’ll need all the help he can get.

Nicole Walker Will Become The Focus Of Their Investigation

Due to “Nicole’s” shady behavior, she’ll become the focus on Ben and Ciara’s investigation. Days of Our Lives spoilers say they’ll break in “Nicole’s” room to poke around. Ciara and Ben will manage to get themselves trapped inside somehow. Kristen DiMera (Stacy Haiduk) might come back and force them to hide under the bed or in the bathroom.

Regardless, Ben and Ciara are about to witness a startling deal. Days of Our Lives spoilers reveal that Kate will do some risky business with a disturbing character. Will “Cin” will see Kristen and Kate reaching a new agreement? They may find out Kristen is alive and could potentially realize she’s been posing as Nicole the whole time!

Of course, Tony DiMera’s (Thaao Penghlis) struggle with Ted led to the latter’s untimely passing. That tidbit may not come out for a while, but DOOL viewers will be eager to see the excitement ahead for Ben and Ciara. We’ll give you updates as other Days news comes in. Stick with the NBC soap and don’t forget to check CDL often for the latest Days of Our Lives spoilers, updates and news.