BY hellodrdavis on August 10, 2019 | Comments: one comment
Related : Days of Our Lives, Soap Opera, Spoiler, Television 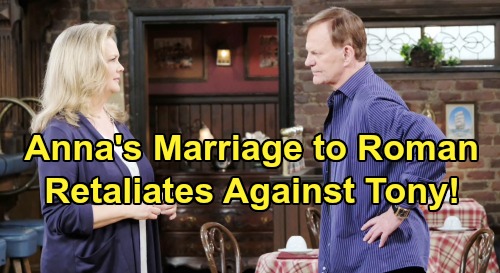 Days of Our Lives (DOOL) spoilers tease that Anna DiMera (Leann Hunley) will soon be on the warpath. As DOOL viewers know, she’s just arrived back in Salem, and the first thing she saw was Roman Brady (Josh Taylor) embracing Kate DiMera (Lauren Koslow). Anna and Roman have had a relationship in the past, so she had the jealousy bug a bit, but that’s nothing compared to what she’ll be feeling when she runs into Tony DiMera (Thaao Penghlis).

Of course, Anna’s appearance in Salem just happens to coincide with that of Tony’s. Tony’s been dragged back by his sister Kristen DiMera (Stacy Haiduk), who is masquerading as Nicole Walker (Arianne Zucker), and he’s married to “Nicole,” as far as everyone is concerned. Well, imagine Anna’s surprise when she comes face to face with Tony in Horton square and realizes that (a) he’s alive, and (b) he’s married to a much younger woman!

Anna’s not going to be happy with Tony, to put it mildly. Tony is the love of her life, and she’s been operating for the past decade under the belief that he died. She’s going to be peeved over his deception, and she’ll start expressing her displeasure by slapping Tony a couple of times. Then Tony will get an earful from his feisty true love.

Tony’s going to be in quite the predicament now. Kristen isn’t going to want to give up her Nicole ruse anytime soon – after all, she’s still holding out hope that Mr. Shin (Michael Hagiwara) will rethink his decision to give Gabi DiMera (Camila Banus) the CEO position at DiMera Industries. According to DOOL spoilers, Tony will indeed demand a divorce from “Nicole,” but things just won’t be that simple.

First off, Anna’s going to remain outraged by Tony’s marriage to Nicole, and Kristen will prevent Tony from divulging to Anna that he’s not really married for love. And according to Days of Our Lives spoilers, Anna will decide to get even with Tony by making a big announcement of her own…that she’s getting married!

That’s right, Anna will quickly devise a plan to get married herself, in order to make Tony jealous and get under his skin, and she’ll rope none other than Roman into being her groom! It doesn’t look like Roman will be too happy to be a part of this plot – after all, he’s been quite smitten with Anna in the past – but he’ll go along with the plan in order to make Anna happy.

It will be interesting to see what happens going forward, as Tony continues to try to get out of his marriage to “Nicole,” while not being able to tell Anna the truth about his marriage. According to DOOL spoilers, Kristen will eventually be revealed, so it looks like Anna will at some point learn the truth about Tony’s marriage.

Of course, it’s always possible that Anna will be married to Roman before the truth about Kristen comes out. Do you think that Anna and Roman will actually tie the knot? Stay tuned to DOOL and don’t forget to check CDL often for the latest Days of Our Lives spoilers, updates, and news.

Anna has a dramatic message for Tony, and Ben and Ciara overhear something they shouldn't. Watch #DAYS, weekdays on @NBC. pic.twitter.com/yjZ94Utnwy