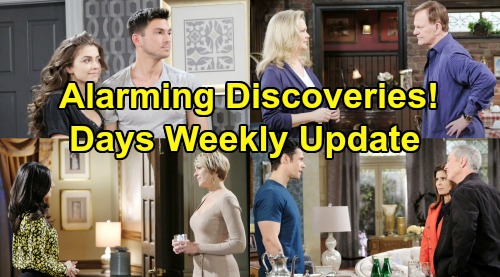 Days of Our Lives (DOOL) spoilers for the week of August 12 to August 16 tease that some snooping will get underway. First, Hope Brady (Kristian Alfonso) will turn to John Black (Drake Hogestyn) for assistance. She’ll hope they can put their heads together and figure out who really killed Ted Laurent (Gilles Marini).

Over with Will Horton (Chandler Massey) and Sonny Kiriakis (Freddie Smith), they’ll rummage through Xander Cook’s (Paul Telfer) belongings. Days spoilers say there’ll be growing suspicions about Xander’s connections and agendas. Ben Weston (Robert Scott Wilson) and Ciara Brady (Victoria Konefal) will also dig around this week, which will put them in a tight spot.

Days of Our Lives spoilers state that Ciara and Ben will get trapped! They’ll be stuck in “Nicole DiMera’s” room after they try to score some evidence. Will they get a Kristen DiMera (Stacy Haiduk) hint or two while they’re in there? Regardless, Ben and Ciara will catch Kate Roberts (Lauren Koslow) making a dangerous deal eventually. They may get a glimpse of Kristen and realize there’s big trouble.

Of course, DOOL fans know Holly isn’t dead and this isn’t the real Nicole. Kristen will get fed up with her enemy’s nagging, so she’ll blast Marlena while she’s wearing her usual mask. John and Marlena will also do some party planning this week. They’ll try to surprise each other with shindigs, but they won’t know the other one’s doing the same thing.

Other Days of Our Lives spoilers state that Jack Deveraux (Matthew Ashford) will spar with Jennifer Horton (Melissa Reeves). She’ll write an article that Jack doesn’t approve of, so Jenn will have to explain her perspective. As for Eve Deveraux (Kassie DePaiva), she’ll be prepping for a legal battle. Eve will hope Justin Kiriakis (Wally Kurth) will take her case and help her take down Jack in court.

Elsewhere, Anna DiMera (Leann Hunley) will rope Roman Brady (Josh Taylor) into her grand plan. Since Tony DiMera (Thaao Penghlis) married “Nicole,” Anna will decide two can play at that game. She’ll convince Roman to marry her as part of her scheme to win Tony back. Roman’s always had a soft spot for Anna, so he’ll put his reservations aside and focus on helping her.

Across town, Haley Chen (Thia Megia) will face a medical crisis and Tripp Dalton (Lucas Adams) will come to grips with his feelings for her. Days spoilers say Tripp will open up to Kayla Johnson (Mary Beth Evans) as he works through his emotions. Finally, Gabi DiMera’s (Camila Banus) stunning discovery will cost her. It appears Gabi will find out “Nicole’s” true identity and leave Kristen in a bind.

Stefan DiMera (Brandon Barash) may try to defend Gabi, but Kristen will somehow knock out both of them. She’ll end the week on a nervous note since she’ll seemingly have two more captives! We’ll give you updates as other Days news comes in. Stay tuned to DOOL and don’t forget to check CDL often for the latest Days of Our Lives spoilers, updates and news.