BY hellodrdavis on November 18, 2019 | Comments: one comment
Related : Days of Our Lives, Soap Opera, Spoiler, Television 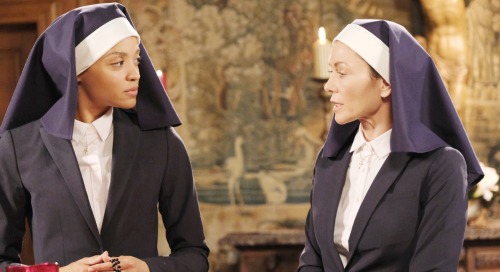 Days of Our Lives (DOOL) spoilers tease that Lani Price (Sal Stowers) completely shocked many viewers when she showed up on canvas in a nun’s habit and at a convent in Europe. It was quite a startling moment, and viewers were in for another big moment when Kristen DiMera (Stacy Haiduk) showed up right alongside her.

It appears that Lani left Salem shortly after leaving Eli Grant (Lamon Archey) high and dry at the altar. DOOL viewers will remember that she was being manipulated by Gabi DiMera (Camila Banus), who forced her to dump Eli. Gabi was (and still is) in control of Julie Williams’ (Susan Seaforth Hayes) pacemaker, which was manufactured by a DiMera-owned subsidiary.

Gabi threatened to essentially kill Julie unless Lani humiliated Eli at the altar and then left him. And, rather than just tell Eli what was going on and calling Gabi’s bluff, Lani actually went along with it and dumped Eli, absolutely devastating him. And although viewers haven’t seen exactly what happened next, it’s clear that at some point thereafter, Lani fled to Europe and joined a convent, becoming a nun.

And then at some point, Kristen obviously showed up as well. Kristen’s story is a bit less clear at this point, although viewers do know that her baby with Brady Black (Eric Martsolf) died, and for some reason she shoved Haley Chen (Thia Megia) down a flight of stairs to her death. These details will no doubt become clearer in upcoming episodes.

But at any rate, it seems that Lani and Kristen are now close, and that they’ve bonded throughout their experiences as nuns. But Days of Our Lives spoilers indicate that Lani hasn’t yet divulged exactly why she left Eli to anyone yet, and that she’ll soon do so for the first time. Whether she confesses her reasoning to Kristen remains to be seen, but it seems quite likely that she will.

And that will make for an interesting situation, since Gabi is now CEO of DiMera Enterprises – Kristen’s family company. If Lani ends up confiding in Kristen about what Gabi put her through, then Kristen might get interested in helping Lani get her revenge on Gabi. In fact, it sounds just like Kristen to suggest that Lani head back to Salem and ruin Gabi’s life.

Of course, at this point it’s unclear whether Kristen has just gone quietly away from Salem, or if she is a fugitive after killing Haley. But if there’s one thing that we know about Kristen, it’s that she’s always determined to preserve her family legacy, and she probably won’t be happy that Gabi’s in the CEO spot at DiMera.

We’ll see what ultimately happens here, but we suspect that if Lani winds up trekking back to Salem, then Kristen will probably have something to do with it, and Kristen will probably have a hidden agenda in the whole thing. Do you think Kristen and Lani will be back in Salem soon? Stay tuned to DOOL and don’t forget to check CDL often for the latest Days of Our Lives spoilers, updates, and news.