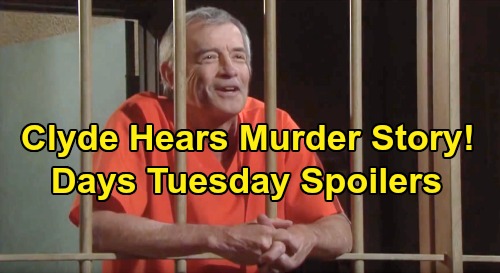 Days of Our Lives (DOOL) spoilers for Tuesday, November 19, tease that some shockers are ahead in Salem. We should note that it’s possible impeachment hearings coverage will affect Tuesday’s schedule. However, if Days does decide to preempt in your area, you can always visit NBC.com and catch up. Regardless, it’s doubtful any episodes will held back for a later date.

With that in mind, let’s look at what’s happening in Tuesday’s episode. Days of Our Lives spoilers say a big return is on the way. In prison, Ben Weston (Robert Scott Wilson) will be taken aback when he spots his father, Clyde Weston (James Read). Clyde has been stuck in solitary confinement for a while now, so he’ll be equally surprised when he sees Ben.

Naturally, Clyde will wonder what Ben’s serving time for. Once Ben shares the details of his conviction, Clyde will think congratulations are in order. He’ll basically suggest he’s proud of Ben for killing Jordan Ridgeway (Chrishell Hartley), but Ben will insist he’s not to blame. Days spoilers say Ben will admit Xander Cook (Paul Telfer) may behind the crime instead. He’ll divulge the theory he cooked up with Ciara Brady (Victoria Konefal) and assure Clyde that he was framed.

Meanwhile, Ciara will head over to Xander’s office and start rummaging around. She’ll be determined to get Ben out of his predicament before it’s too late. DOOL fans know Ben’s on death row, so Ciara’s definitely on a tight schedule here.

Ben could die if Ciara can’t find evidence to clear him, but there’s a good chance she’s wrong about Victor Kiriakis (John Aniston) ordering Xander to kill Jordan. Days of Our Lives spoilers say this mystery has some twists and turns coming up, so don’t miss any new clues that emerge.

Back in the slammer, Eve Donovan (Kassie DePaiva) will request a meeting. She’ll contact Abigail DiMera (Kate Mansi) and push her to visit Statesville ASAP. Abigail will deny Eve’s request at first, but she’ll eventually decide to hear Eve out. It won’t be long until Eve rants about being set up, so Abigail will agree to seek the truth about who pushed Jennifer Horton (Melissa Reeves).

DOOL viewers know Hope Brady (Kristian Alfonso) currently has Princess Gina Von Amberg’s memories, and Princess Gina is the one who shoved Jenn off that balcony. It sounds like Princess Gina’s secret could be in jeopardy, so she’ll have to watch out for Abigail and her attempt to uncover the real story.

Finally, Xander and Sarah Horton (Linsey Godfrey) will do some baby bonding. They’ll strengthen their connection over Mackenzie “Mickey” Horton, but Clyde’s about to unleash chaos. He’ll order Mickey’s kidnapping by Wednesday, November 20, so stay tuned for some hot drama. We’ll give you updates as other Days news comes in. Stick with DOOL and don’t forget to check CDL often for the latest Days of Our Lives spoilers, updates and news.