Days of Our Lives Spoilers: Mickey’s Kidnapper Keeps Sarah’s Baby Unless Clyde Gets a Deal 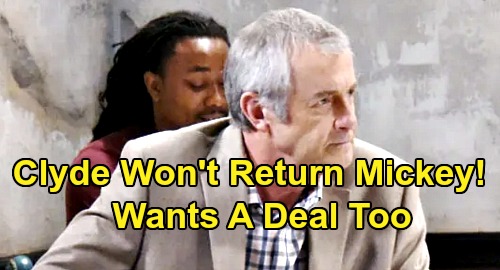 Days of Our Lives spoilers reveal Sarah Horton’s (Linsey Godfrey) baby Mickey is kidnapped. Xander Cook Kiriakis (Paul Telfer) must confess to a crime to get Mackenzie “Mickey” Horton returned to her mother. However, Clyde Weston (James Read) doesn’t keep his word. He wants a sweet deal just like his son, and the infant won’t be returned unless someone makes it happen.

DOOL spoilers tease Xander is backed into a corner by Clyde. In order to get Sarah’s baby back, he must confess to killing Jordan Ridgeway (Chrishell Hartley). Salem’s bad boy normally wouldn’t agree and would strike back, but he can’t risk his new family. He would do anything for Sarah, so he writes up a confession and hands it to Hope Brady (Kristian Alfonso).

Of course, Sarah won’t have any idea that her little girl is gone because of Xander. There is no way he will tell her about Clyde’s demand either. Sarah thinks he’s changed for the better. If she found out that he committed murder, Xander would lose her forever.

Xander tells Clyde that the deed is done. He’s turned in his confession and wants Sarah’s baby returned. Everyone, including Xander, should know that Clyde can’t be trusted. He goes back on his word and refuses to return the little girl.

If Ben Weston (Robert Scott Wilson) was able to get a sweet deal out of prison that easily, then Clyde wants to capitalize on that. Always self-serving, he is capable of anything to get his way. Xander knows how dangerous the felon is, but he doesn’t have the power to make any deals.

Xander had already planned on taking back the confession once the baby was back in Sarah’s arms. He never intended for her to learn about his shady dealings. “Xarah” is finally bonding and Xander is getting everything he wants — he is living the perfect life. With the kidnapping complication, it increases the risk that Sarah will find out the truth. He can’t risk that, so he goes into sleuthing mode.

Days of Our Lives spoilers indicate that Xander tries to take back his confession. He isn’t going to do this through Hope. Instead, he does it his way — by sneaking into Hope’s office at the police station and snooping through file folders. He’s going to find that piece of paper and destroy it. In his mind, if the confession vanishes, then he has nothing to worry about, right?

Ciara Brady (Victoria Konefal) ends up taking matters into her own hands. She couldn’t do anything about the situation before. Now that she realizes the baby isn’t being given back, she hunts down Clyde’s kidnapping connection. There is no way that Clyde is negotiating a deal to get him released from prison.

She ends up finding the individual and makes a bold, daring move. This could go one of two ways, though. She could manage to get Sarah’s baby and be Salem’s newest hero. But it’s more likely that she underestimates the criminal and ends up putting baby Mickey’s life — as well as her own — in serious danger. Stay tuned to DOOL and don’t forget to check CDL often for Days of Our Lives spoilers, updates and news.