BY hellodrdavis on November 17, 2019 | Comments: one comment
Related : Days of Our Lives, Soap Opera, Spoiler, Television 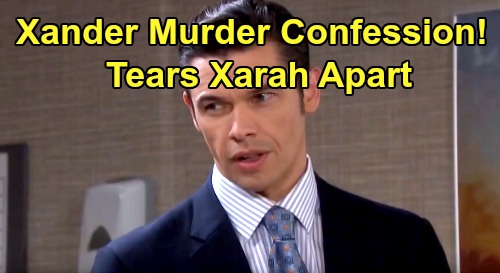 Days of Our Lives (DOOL) spoilers tease that Xander Kiriakis (Paul Telfer) will make a big declaration. As DOOL viewers know, he’s been pining after Sarah Horton (Linsey Godfrey) for a long time. He would seemingly do anything for Sarah – in fact, he’s even pretended to be baby Mickey’s biological father for Sarah for over a year now, so that Eric Brady (Greg Vaughan) doesn’t know that he’s really the bio dad.

And from everything that DOOL viewers have seen since the time jump, it looks like Xander and Sarah are getting along wonderfully, although it doesn’t seem that they’re fully together as a couple. But they do appear to have a healthy friendship and good co-parenting relationship between them, and Xander appears to be as happy as can be about it, as does Sarah.

But soon, things are going to get pretty scary for Sarah and Xander. According to DOOL spoilers, baby Mickey will be kidnapped while Sarah is distracted for a moment in town square. Of course, Sarah will be beside herself with worry and fear, and Xander will do his best to comfort her. As it turns out, Clyde Weston (James Read) will have arranged for Mickey to have been kidnapped, all as a vehicle to get Xander to confess to Jordan Ridgeway’s (Chrishell Hartley) murder.

Clyde will want Xander to confess, so that his son Ben Weston (Robert Scott Wilson) can get off death row for Jordan’s murder. Of course, DOOL viewers know that Ben didn’t kill Jordan, and it’s not at all clear at this point whether Xander actually did it or not. But DOOL spoilers do say that Xander will write out a confession to the murder, since Clyde or Clyde’s people will instruct him that this is the only way to get Mickey back.

How his declaration will come about remains to be seen, but it could occur in the course of Xander explaining why he would confess to something as horrible as murder. Assuming that Xander didn’t really kill Jordan, then his confession to the crime will be pretty remarkable, and Xander might need to explain to Sarah why he confessed…and the fact that he loves her and would do anything for her would be a good reason.

We’ll see exactly what happens here, and how Sarah reacts to Xander’s profession of love, but it’s likely that she’ll be far too worried about Mickey to reciprocate. According to DOOL spoilers, Clyde will renege on his arrangement with Xander and won’t give Mickey back even after Xander has confessed, so there’s going to be a real mess, and it looks like the kidnapping saga will go on for a while.

What do you think will happen here? Will Sarah be receptive to Xander’s declaration of love? Stay tuned to DOOL and don’t forget to check CDL often for the latest Days of Our Lives spoilers, updates, and news.