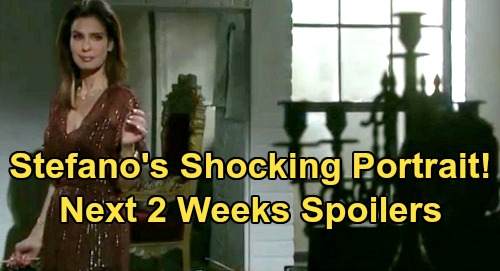 Days of Our Lives (DOOL) spoilers for the next two weeks tease that some tense situations are coming up in Salem. During the week of November 18-22, Eve Donovan (Kassie DePaiva) will convince Abigail DiMera (Kate Mansi) to visit her in prison. Abigail will doubt Eve’s side of the story, but Eve will insist she was set up. After Eve makes her spiel, Abigail will decide to see if Eve may be onto something. She won’t want Jennifer Horton’s (Melissa Reeves) attempted murderer getting away with it.

Over with Jennifer Horton (Melissa Reeves), she’ll be devastated when she learns Adrienne Kiriakis (Judi Evans) passed away. She’ll get choked up as she asks how Adrienne died. DOOL fans know Will’s legally responsible for Adrienne’s death, but he didn’t mean to kill her. We also know an upcoming flashback points to internal injuries. Those injuries were just too severe for Adrienne to overcome.

As for the details of this awful accident, Jennifer should get at least a few of those. She may also learn about Haley Chen’s (Thia Megia) death and the difficulties JJ Deveraux’s (Casey Moss) faced. At Statesville, Ben Weston (Robert Scott Wilson) will finally encounter his father. Clyde Weston’s (James Read) been stuck in solitary confinement, but he’ll make it out and have a little chat with Ben soon.

Ben will insist he’s innocent and explain that Xander Cook (Paul Telfer) may have killed Jordan Ridgeway (Chrishell Hartley). It’s doubtful that theory’s correct, but Clyde will run with it. He’ll order one of his henchmen to snatch Sarah Horton’s (Linsey Godfrey) baby and use it to secure Xander’s admission of guilt.

Days spoilers say Sarah will lose it when she realizes Mackenzie “Mickey” Horton has vanished. It won’t be long until Xander hands a signed confession in at the Salem PD. Unfortunately, Clyde will have his minion hang onto Mickey for a while. He’ll count on this kid being his ticket to freedom!

During the week of November 25-29, Ciara Brady (Victoria Konefal) will tackle this kidnapping crisis. She’ll have to handle everything since Ben will be stuck in his cell. It looks like Sarah will enjoy a happy reunion with Mickey soon, which will leave Xander in a bind. He won’t want that confession to stick, so he’ll do his best to destroy it.

Other Days of Our Lives spoilers say Nicole Walker’s (Arianne Zucker) revelation will leave Eric Brady (Greg Vaughan) in shock. Brady Black (Eric Martsolf) will end up consoling Nicole later, so that’ll probably be after an “Ericole” blowup. Will Nicole tell Eric he’s the father of Sarah’s baby? If the guilt eats away at her enough, that may be the bomb Nicole drops.

Over with Chad DiMera (Billy Flynn), his meeting with Stefano DiMera (last played by the late Joseph Mascolo) won’t turn out like he anticipated. Perhaps Stefano won’t show up or will appear different that Chad imagined – but we won’t see Stefano at that point. That’s because Princess Gina is set to unveil that portrait she’s been working on. It’s the perfect opportunity to reveal Stefano’s surprising new look.

When Abigail wondered how Chad was so sure this was Stefano, Chad’s answer was simple: Stefano’s MEMORIES. Talk about an anvil! Princess Gina will show off her fine painting on November 27, which just so happens to be the day Stephen Nichols (Steve Johnson) makes his return to Days of Our Lives.

It certainly sounds like we’re about to meet “Stevano” aka Steve with Stefano’s memories implanted. When Princess Gina whips that portrait around, it seems likely we’ll see Steve striking Stefano’s familiar pose. We’ll give you updates as other Days news comes in. Stay tuned to DOOL and don’t forget to check CDL often for the latest Days of Our Lives spoilers, updates and news.