Days of Our Lives Spoilers: Steve Johnson Not Himself – Dr. Rolf Transformed ‘Patch’ Into Stefano DiMera 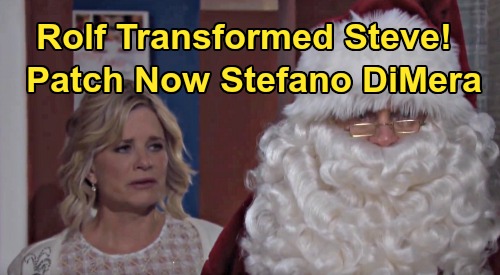 Days of Our Lives spoilers reveal there will be a soapy mystery that involves Steve “Patch” Johnson (Stephen Nichols). It seems that Dr. Rolf (William Utay) didn’t just transform one Salemite, but the sinister scientist may have done the devious deed to Steve as well.

Steve is finally coming back to Salem after a long absence. Unfortunately, there won’t be any “Stayla” smooches. Life in Salem has changed drastically during the time he was gone. This includes Dr. Kayla Johnson (Mary Beth Evans) aka “Sweetness” moving on with another man. However, Kayla’s romance with Justin Kiriakis (Wally Kurth) won’t be the only shocking revelation. “Patch” has his own bombshell.

Days of Our Lives spoilers tease that Dr. Rolf may transform someone else. He’s already done it with Hope Brady (Kristian Alfonso), who was reborn as Princess Gina. It has been a success and the mad scientist has “grand plans.” So, of course he transforms someone else.

It seems that Stefano DiMera’s (formerly Joseph Mascolo) return will be explained. It can’t be the iconic soap character coming back. Not only has the actor passed away, but after Mascolo’s death, fans were in an uproar over rumors of a recast. Head writer Ron Carlivati heard those fans loud and clear. With that being said, creative minds think outside the box. How can Stefano return without him actually appearing? It seems this is our answer.

That means Stefano is returning in another form – through Dr. Rolf implanting a brain chip with Stefano’s memories into Steve’s neck. Not only does “Patch” think that he is “Steve-ano” but he does his best to actually be the DiMera patriarch. He talks like him, acts like him, he’s even listening to opera, smoking cigars and playing chess. This must be why Steve isn’t wearing his eye patch, because Stefano doesn’t need it.

Of course, loved ones will try to get back the “Patch” they remember. There is only one problem with this. It’s possible that Dr. Rolf has thought this through and anticipated the chance of someone trying to extract the brain chip. So he put it in a place where it could kill the subject if anyone takes it out.

Days of Our Lives spoilers suggest that there will be something needed to make the transformation complete. For Princess Gina, it was a tiara. For Steve, it must be the portrait of Stefano that Princess Gina has been painting. Once it’s complete and it is shown to “Patch,” the new Stefano DiMera will be revealed, complete with his memories. Dr. Rolf has grand plans for the town.

Whatever they are, everyone better prepare themselves because it will take determination, bravery and a miracle to save Salem now. Stay tuned to DOOL and don’t forget to check CDL often for Days of Our Lives spoilers, updates and news.