Days of Our Lives Spoilers: Olivia Rose Keegan Returns as Claire Brady – Here’s What You Need To Know 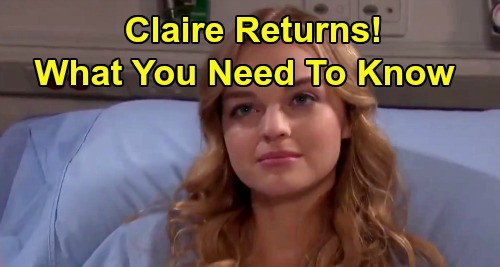 Days of Our Lives (DOOL) spoilers tease that one NBC soap star is set to make a comeback. Many DOOL fans were sad to see our favorite little pyromaniac go once the jig was finally up for Claire Brady (Olivia Rose Keegan). Claire’s descent into madness was a surprisingly good story despite the character destruction.

Keegan won us over with her fantastic portrayal, but it still a bummer to lose Princess Claire Bear in the end. We were treated to a few more scenes of Claire “haunting” Haley Chen (Thia Megia), but it seems that short PTSD plot has fizzled. On the bright side, DOOL’s fall promo reveals that Claire is set to return to Days of Our Lives. However, it looks like this will once again be in someone’s mind.

The preview video features Claire in a hospital bed listening to Jordan Ridgeway, who’s also a patient with her at Bayview. Jordan can be seen in a naughty nurse’s outfit, which is a big indicator that this is a Halloween special. Days of Our Lives spoilers say Jordan will push Claire to stir up trouble with her. She’ll suggest they should go cause some mischief, which will earn a slight smirk from Claire.

Days often brings back faces from the past for the spooky holiday. In 2017, True O’Brien reprised her role as dead Paige Larson while Melissa Archer stepped back into the role of deceased Serena Mason. 2018 brought Thaao Penghlis back as Andre DiMera for a twisted nightmare along with Anjelica Deveraux’s (Judith Chapman) creepy ghost.

This year’s Halloween chaos shouldn’t disappoint either. Claire is alive and on the road to recovery, which is why it’s doubtful they’ll truly let her have a major setback. Plus, we know Jordan will be released from Bayview once Rafe Hernandez (Galen Gering) signs on as a legal guardian. He’ll have to watch Jordan closely, but she wouldn’t sneak back in Bayview for troublemaking.

Instead, perhaps this fantasy will play out as someone like Ben Weston (Robert Scott Wilson) grows fearful about Jordan’s mental state. It’s worth mentioning that Ben will be wary of his sister despite his desire to see her recover. Days of Our Lives spoilers say Ciara Brady (Victoria Konefal) comes first for Ben, so it makes sense that he’d be fretting over Jordan and Claire in his dreams.

Then again, it could be Rafe trying decide whether he’s willing to accept responsibility for Jordan. His mind could go to some awful places! Regardless, Claire will fit in all the drama and we’d say Halloween is the perfect time to expect her.

Are you glad Olivia Rose Keegan is coming back as Claire? Would you like to see her return permanently? We’ll give you updates as other Days news emerges. Stay tuned to DOOL and don’t forget to check CDL often for the latest Days of Our Lives spoilers, updates and news.