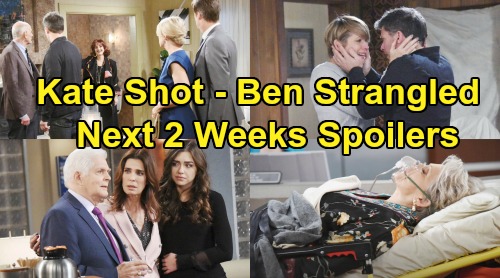 Days of Our Lives (DOOL) spoilers for the next two weeks tease that several characters will be in crisis mode. During the week of September 2-6, Ciara Brady (Victoria Konefal) will panic when she finds Julie Williams (Susan Seaforth Hayes). She’ll be with Ben Weston (Robert Scott Wilson), who’ll start CPR while Ciara freaks. They’ll await paramedics and realize the situation is quite fire.

Meanwhile, Hope Brady (Kristian Alfonso) will read Ted Laurent’s (Gilles Marini) last words through that letter she received. It’ll leave her wondering what might’ve been and asking herself if love’s really in the cards again. Bo Brady (Peter Reckell) was arguably Hope’s soul mate, but he’s gone and Hope would like to find someone else to share her life with. The problem is she can’t seem to find a good man!

Even if Ted had stuck around, he was a liar and someone who hurt people Hope cares about. Let’s hope Days has a better love interest in mind eventually, but it looks like a different kind of story is coming up first. Until that drama kicks off, Hope will have to deal with Julie’s recent heart attack. She’ll fear the worst along with Doug Williams (Bill Hayes), Eli Grant (Lamon Archey), Lani Price (Sal Stowers) and Ciara.

Over with Sarah Horton (Linsey Godfrey), she’ll battle suspicions that lead to a pregnancy test. It’ll ultimately confirm her worst fears. Elsewhere, Eric Brady (Greg Vaughan) will track down Nicole Walker (Arianne Zucker) and Holly Jonas (Harlow and Scarlett Mallory). There’ll be some powerful “Ericole” moments along with a sweet Eric and Holly reunion soon after.

Days of Our Lives spoilers say the action will continue during the week of September 9-13. Sarah will find herself torn about dropping the baby bomb. She’ll consider coming clean to Eric, but he’ll tell Sarah his future lies with Nicole before she has the chance.

Across town, Brady Black (Eric Martsolf) will stop a murder! When Xander Cook (Paul Telfer) proves unwilling to finish the job, Victor Kiriakis (John Aniston) will decide to kill Ben himself. He’ll want Ben as far away from Ciara as possible, but six feet under is far enough. Thankfully, Days of Our Lives spoilers say Brady will shut down this deadly attempt with his interruption.

Next, Kate Roberts (Lauren Koslow) will be rushed to the hospital after a faceoff with Vivian Alamain (Robin Strasser). Days spoilers state that Kate will be shot, although there’s no guarantee Vivian will pull the trigger. Whether Vivian fires the gun or not, she’ll be thrilled over Kate’s predicament. Vivian will even sneak in Kate’s hospital room with another round of deadly intentions.

Other DOOL spoilers say Eve Deveraux (Kassie DePaiva) will seek revenge. Jack Deveraux (Matthew Ashford) hurt her, so she’ll want to hurt him right back. Eve will do everything in her power to destroy Jack’s looming bliss, which she’ll feel is coming due to Dr. Wilhelm Rolf’s (William Utay) return to Salem.

Jack and Jennifer Horton (Melissa Reeves) will convince Dr. Rolf to assist with Jack’s memory mission, but Eve could cause some snags as this hot plot gets hotter. Finally, Gabi DiMera (Camila Banus) and Stefan DiMera (Brandon Barash) will get grilled by Eli. He’ll have plenty of questions about Kate’s shooting, so don’t miss all the suspense.

It sounds like the next two weeks will pack a punch! We’ll give you updates as other Days news comes in. Stay tuned to DOOL and don’t forget to check CDL often for the latest Days of Our Lives spoilers, updates and news.