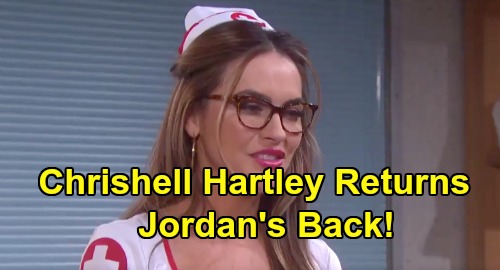 Days of Our Lives (DOOL) spoilers tease that Chrishell Hartley is headed back to the NBC soap as Jordan Ridgeway. DOOL fans know Jordan went off her rocker and became obsessed with protecting everyone from Ben Weston (Robert Scott Wilson). When Ciara Brady (Victoria Konefal) got in her way, Jordan was prepared to seal her deadly fate.

Thankfully, Ciara survived and Jordan’s been getting the help she needs at Bayview. She also revealed her secret baby, David Ridgeway, so Rafe Hernandez (Galen Gering) has been caring for him while she gets better. However, Rafe doesn’t know how long that’ll take. He fears it could be years before Jordan is well enough to leave Bayview – if she’s ever well enough at all.

Of course, DOOL can’t wait that long to get Jordan back in the action. She’s returning to Days of Our Lives this fall, and it looks like she’ll be part of the story in two different ways. The first is a crazy Jordan comeback. We’ll see her in a naughty nurse’s uniform planting a kiss on Rafe and plotting mischief with fellow Bayview resident Claire Brady (Olivia Rose Keegan).

That’ll most likely be for a campy Halloween special. They deliver a special episode every year, which always brings some slightly spooky but mostly hilarious surprises. It’ll be fun to see Jordan as a troublemaker again, but a reformed Jordan is headed home, too. Days of Our Lives spoilers say she’ll be ready for her release soon, but there’ll be a catch.

Jordan will be allowed to reenter society and slowly get her life back on track, but someone will have to accept legal responsibility for her. Since Rafe has bonded with David and cares about his ex, he’ll step up to do it. Jordan will move in with Rafe, which could revive some romantic feelings between them. Unfortunately, not everyone will view Jordan’s release as a good thing.

Ben Weston (Robert Scott Wilson) loves his sister with all his heart, but Ciara is his priority. He’s a big believer in second chances due to his own situation, but he’ll still be concerned about the threat Jordan poses. How can Ben know for sure that Jordan’s truly well? He can’t and that’s the problem!