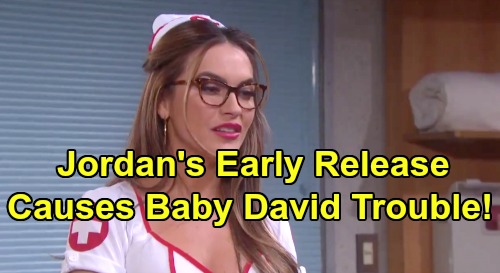 Days of Our Lives spoilers reveal Rafe Hernandez (Galen Gering) will finally get some scenes. It has to do with Jordan Ridgeway’s (Chrishell Hartley) baby. It is too soon for her to parent her son, David. She needs a guardian and Rafe steps up. However, could this lead to a custody battle since Rafe has gotten so close to the child?

For the past few weeks, Rafe has been caring for Jordan’s baby. She is unable to due to her being locked up in Bayview, a psychiatric facility. Rafe has gotten close to the child, so there will definitely be issues when Jordan wants to reclaim David after her discharge.

Days of Our Lives spoilers for fall 2019 reveal Jordan gets released from the psychiatric hospital. Ben Weston (Robert Scott Wilson) is glad his sister is better. However, he is still concerned about Ciara Brady’s (Victoria Konefal) safety.

According to the latest Days of Our Lives buzz, it is too soon for Jordan to take care of her son. There is also some concern about her taking care of herself. So, a guardian needs to be appointed and Rafe steps forward as that individual. It is a kind and generous gesture. However, they have too much history together. Besides, he needs to focus on caring for little David instead of babysitting Jordan.

Who Should Get Custody of David?

It is clear that Jordan is not stable enough to care for a child. Not only did she try to set Ciara on fire, but she abandoned her baby in California. It was only after she was hospitalized for a few days that she opened up about David.

Rafe was the only one who believed her and looked into the matter. It turns out Jordan’s baby was not a delusion. Ever since then, Rafe has been caring for the ltitle boy. They are bonded and attached. Unless Jordan does a complete 180, it seems Rafe would be the better choice to raise the child.

Who do you think should raise David? Is Jordan really equipped to handle parenting right now? Should Rafe get custody? Stay tuned to DOOL and don’t forget to check CDL often for the latest spoilers, updates and news.