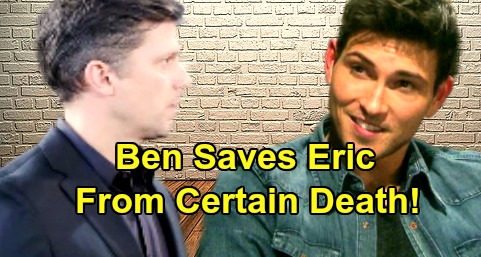 Days of Our Lives (DOOL) spoilers tease that Eric Brady (Greg Vaughan), Jack Deveraux (Matthew Ashford) and Jennifer Horton (Melissa Reeves) will find themselves on quite an adventure. They’ll be on a mission to bring Nicole Walker (Arianne Zucker) and Holly Jonas (Harlow and Scarlett Mallory) home, but it’ll take a huge detour thanks to a stunning secret.

On September 2, Days spoilers say Eric and the others will learn this shocker. It looks like they’ll find out Vivian Alamain survived since she’ll make a comeback the next day. Of course, Vivian will have a brand-new face this time around. Louise Sorel wasn’t given enough notice, so DOOL got Robin Strasser to take over the part of Vivian. She’s alive and well, so that’ll come as a surprise to our rescue crew.

It won’t be long until grave danger strikes. Days of Our Lives spoilers state that Eric and Vivian will wind up in a risky situation. One of Kristen DiMera’s (Stacy Haiduk) guards will appear and point a gun straight at Eric. He’ll plan to shoot him, and Vivian should be next in line!

Thankfully, Days spoilers say Ben Weston (Robert Scott Wilson) will emerge as a last-minute hero. He’ll save Eric from certain death and probably Vivian, too. Vivian will have the chance to happily reunite with Stefan DiMera (Brandon Barash) in the week ahead. Gabi DiMera (Camila Banus), on the other hand, should be wary of her meddling mother-in-law. She’ll undoubtedly get defensive about their new marriage.

As for Eric, his luck will turn around with a new clue. Days of Our Lives spoilers reveal it’ll ultimately lead Eric to Nicole. He’ll finally get the real reunion he’s been waiting for! Eric will come face to face with Nicole again on September 5, so “Ericole” fans will definitely want to tune in. Some heartfelt, emotional scenes are coming up.

Eric and Nicole will have a lot to sort out, but finding Nicole will be a good first step. It sounds like this storyline will continue to bring some hot drama. We’ll give you updates as other Days news emerges. Stick with DOOL and don’t forget to check CDL often for the latest Days of Our Lives spoilers, updates and news.