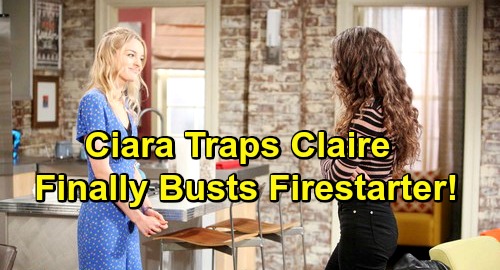 Days of Our Lives (DOOL) spoilers tease that Ciara Brady (Victoria Konefal) will finally believe Ben Weston’s (Robert Scott Wilson) claims. He’s been convinced that Claire Brady (Olivia Rose Keegan) had to be behind the cabin fire, but Ciara struggled to believe it was true. She knows Claire’s capable of a lot of things, but she didn’t think attempted murder was one of them.

However, Ciara will side with Ben after Claire’s second blaze. Ben will be stunned when he makes it to the Horton cabin and finds it engulfed in flames. Days of Our Lives spoilers say someone will have to rescue Tripp Dalton (Lucas Adams) and Haley Chen (Thia Megia). It might as well be Ben since he’ll be there! It looks like Ben may be a hero all over again by pulling Haley and Tripp out before it’s too late.

Claire will likely make her getaway and play dumb later, but Ben and Ciara won’t let her get by with that. After Ben gives Ciara updates, Days of Our Lives spoilers say they’ll team up to take Claire down. Days of Our Lives spoilers state that during the week of June 10-14, they’ll set a trap and hope that Claire walks right into it. There’s a good chance their strategy will pay off, but it may not offer the solid proof they need.

Of course, it wouldn’t matter anyway as long as Eve Deveraux’s (Kassie DePaiva) in charge and has this vicious vendetta. She’ll happily bend or break any rule she needs to. The evidence clearly doesn’t matter to Eve since she wants Ben to pay for Paige Larson’s (True O’Brien) murder.

Eve knows Ben didn’t set the fires, but she also knows he killed her daughter. Reformed or not, there’s no bringing Paige back. DOOL spoilers state that Eve will have Ben arrested, but what about Ciara? She’ll undoubtedly work hard on the outside to get charges brought against the true culprit. Since Claire’s actually guilty, Ciara will think it’s only fair that Claire go down instead of Ben.

Days spoilers say Ciara will keep the scheme going after Ben’s locked up and count on it to pay off. With any luck, the walls will close in on Claire and force her to confess. Eve already knows Claire’s responsible, but Claire needs to take real responsibility and force the commissioner to back off Ben.

It sounds like this storyline will bring some interesting twists and turns. We’ll keep you posted as other Days news comes in. Stay tuned to DOOL and don’t forget to check CDL often for the latest Days of Our Lives spoilers, updates and news.