BY hellodrdavis on June 4, 2019 | Comments: one comment
Related : Days of Our Lives, Soap Opera, Spoiler, Television 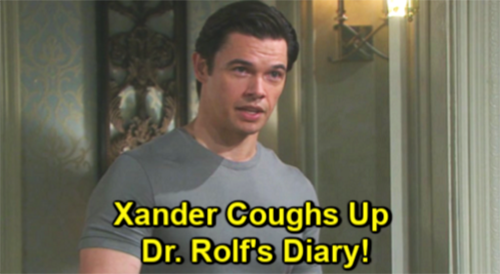 Will has a brain tumor that’s a side effect of Rolf’s memory serum that Will injected himself with last year. To effectively treat the tumor, Will needs Rolf’s diary, and he needs it now.

Of course, the only problem here is that Xander doesn’t particularly care about Will or his well-being. After an emotional appeal from John Black (Drake Hogestyn), Eve Deveraux (Kassie DePaiva) was convinced that Will needed Rolf’s diary.

The Doctors Are In A Bind

But Eve was unable to persuade Xander to hand it over. And given that Eve just became police commissioner, she can’t exactly admit that she knows that it’s Xander who has the diary.

And that’s going to put Will’s doctors and loved ones in a bind. There’s only so much that Kayla Johnson (Mary Beth Evans), Sarah Horton (Linsey Godfrey), and Rex Brady (Kyle Lowder) can do for Will without the diary. They absolutely need to get their hands on Rolf’s formulas in order to find a way to save Will.

But there may be a silver lining here, and it all has to do with Sarah. It seems that Xander may be willing to hand over the diary in order to get in good with Sarah. According to DOOL spoilers, Xander will try to impress Sarah by swooping in to save the day. Xander has a bit of a crush on Sarah and would do pretty much anything to get into her good graces.

Will Xander Cough Up The Diary?

Perhaps Xander will pretend to have suddenly located the diary, or he’ll suddenly “realize” that he had it in his possession all along. At any rate, DOOL spoilers say that Xander’s going to do something that he hopes will impress Sarah, and this will be followed by him getting grilled by Sarah, Brady Black (Eric Martsolf), and Maggie Kiriakis (Suzanne Rogers) about Rolf’s diary.

So it certainly sounds like he’s going to cough up the diary, but it won’t be out of the goodness of his heart. In typical Xander fashion, he’ll have an ulterior motive…to make a favorable impression on Sarah. We’ll see if Sarah actually falls for that.

Do you think that Xander is going to willingly hand over the diary and, in doing so, save Will’s life? Stay tuned to DOOL and don’t forget to check CDL often for the latest Days of Our Lives spoilers, updates, and news.