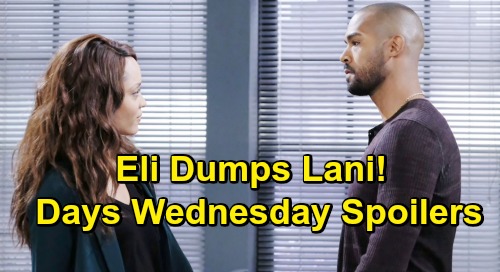 Days of Our Lives (DOOL) spoilers for Wednesday, June 5, tease that John Black (Drake Hogestyn) will bring Sonny Kiriakis (Freddie Smith) up to speed on his suspicions. He’ll tell Sonny that the security footage pointed to Eve Deveraux (Kassie DePaiva) as the diary thief, but she’s claiming she doesn’t have it. John doesn’t buy that Eve’s telling him the whole story, and Sonny won’t either. That’s why Sonny will seek Eve out for a heated confrontation.

Dr. Wilhelm Rolf’s (William Utay) formula might save Will Horton’s (Chandler Massey) life, so Sonny will be extra motivated here. He’ll start by going to Eve and ripping into her for lying about what she knows. Sonny’s rant will continue in the following episode, so stay tuned to watch Eve squirm. Let’s hope she’ll spill the beans about Xander Cook (Paul Telfer) before this conversation’s over.

Meanwhile, Dr. Marlena Evans (Deidre Hall) will realize a phone call must be made. She’ll need to contact Sami Brady (Alison Sweeney) and let her know Will’s death is imminent. It’s sure to be a heartbreaking call, but Sami deserves to hear how serious this is and have a chance to say goodbye.

Days Lives spoilers state that Sami will give Lucas Horton (Bryan Dattilo) updates as well, so they’ll both be headed home soon. Fortunately, this isn’t the end of the road for Will. Good news is on the way sooner or later, so DOOL fans will just have to be patient and enjoy the gripping drama.

Other Days of Our Lives spoilers say Eli Grant (Lamon Archey) will make a big decision. Lani Price (Sal Stowers) has been spending all her time with Jordan Ridgeway’s (Chrishell Hartley) baby lately. She’s been bonding with Rafe Hernandez (Galen Gering) as a result, so Eli’s starting to get fed up with all this.

When Lani stands her ground on being there for David Ridgeway, Eli will decide he can’t do this anymore. That’s not their baby and Eli’s feeling neglected, so he’ll dump Lani and let her do what she wants. Days of Our Lives spoilers say Lani’s vulnerability will lead to a shocking move. It looks like Lani will plant a kiss on Rafe Hernandez (Galen Gering) and spark some awkwardness in the process.

Finally, Claire Brady (Olivia Rose Keegan) will unleash her fury. She’ll track Tripp Dalton (Lucas Adam) down at the Horton cabin and spot him looking cozy with Haley Chen (Thia Megia). To Claire, it’ll seem like they’re about to run away together. Claire’s rage will drive her to set another fire and attempt two murders, so things are about to spiral out of control.

Ben Weston (Robert Scott Wilson) will figure out Claire’s location and chase after her, but more trouble’s brewing! We’ll keep you posted as other Days details emerge. Stick with DOOL and don’t forget to check CDL often for the latest Days of Our Lives spoilers, updates and news.