BY hellodrdavis on June 20, 2019 | Comments: one comment
Related : Days of Our Lives, Soap Opera, Spoiler, Television 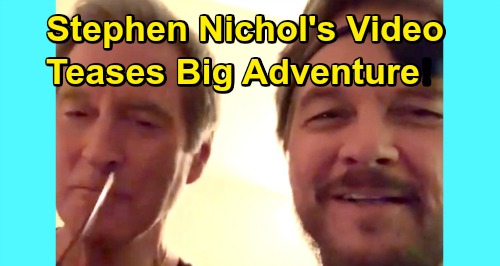 Days of Our Lives (DOOL) spoilers has some exciting news to pass on about some upcoming developments on the show. As DOOL viewers know, Stephen Nichols is returning to the show, but since the show tapes a full six months in advance, it will be a while before we actually see his character Steve Johnson back on screen.

Steve was last seen in the Fall of 2018 when he was arrested for treason due to his bionic eye that, unbeknownst to him, recorded top-secret information. Steve was later cleared of the charges, but then immediately went on assignment and has been away from Salem and his beloved Kayla Johnson (Mary Beth Evans) ever since.

The good news is that Stephen is taping scenes now, and he was kind enough to share an update with his social media followers about how his return to DOOL is going. Stephen posted a selfie video of himself behind the scenes at the show looking and sounding quite happy to be back.

Specifically, Stephen’s video shows him walking in and around the set at the end of a taping and musing about what a great day he had. “Well, that was a pretty good day at the old Days of Our Lives,” he says. “I was working with my buddy Drake.”

Of course, Stephen is referring to Drake Hogestyn, who portrays John Black on the show. In the video, Stephen approaches Drake behind the scenes and says, “I was just telling everybody about what a great day we had.”

Drake then laughs and responds, “Oh we did – so much fun playing with my mate here.” Stephen then calls the two of them buddies and “partners” and the video ends.

Stephen captioned the video as follows: “Thanks, Drake #drakehogestyn for being a great #friend and #partner. #days #work #grateful #blackpatch #patchandkaylaforever.”

As DOOL viewers know, John and Steve were partners and private investigators at the Black Patch agency before Steve went off-screen, and it sounds like they’ll be back to private investigating upon Steve’s return to Salem!

Stephen’s followers have been responding enthusiastically to his video. One follower said: “I hope this means we’re getting a #BlackPatch adventure. I love when you & Drake have scenes together. It’s hard waiting for your return. Thank you for posting – it makes the waiting a little easier.”

We agree with that sentiment and are looking forward to Stephen’s return to DOOL and seeing some great teamwork between Steve and John. And we can’t wait for Steve to be reunited with Kayla. Are you looking forward to his return? Stay tuned to DOOL and don’t forget to check CDL often for the latest Days of Our Lives spoilers, updates, and news.

Thanks, Drake #drakehogestyn for being a great #friend and #partner #days #work #grateful #blackpatch #patchandkaylaforever