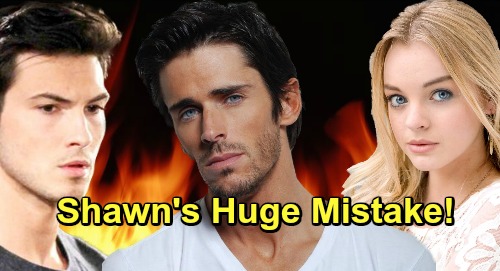 Days of Our Lives (DOOL) spoilers tease that Shawn Brady (Brandon Beemer) will fume over Ben Weston’s (Robert Scott Wilson) behavior. He won’t be happy about the way Ben’s treated Ciara Brady (Victoria Konefal), but that’s mainly because he’ll have the wrong information. Shawn would undoubtedly disapprove anyway thanks to Ben’s past crimes, but the latest lies won’t help matters.

Ciara and Tripp Dalton (Lucas Adams) are currently working on a plan to take Claire Brady (Olivia Rose Keegan) down. Part of that plan includes convincing Claire that they believe Ben is guilty. Claire was excited when she first learned Ciara had turned against Ben. She figured she was in the clear since Ciara is typically Ben’s biggest cheerleader.

Without Ciara, Ben has no one to fight for him. Of course, Ciara is still very much in Ben’s corner. She just has to play it cool and make it look like she’s heartbroken over his betrayal. Days of Our Lives spoilers say Shawn won’t like how Ciara has suffered.

He’ll want to stick up for his sister, so he’ll confront Ben and offer a fierce warning. Shawn may contend that if Ben ever bothers Ciara or even goes near her again, there’ll be a steep price to pay.

Days fans can expect Ben to take what Shawn dishes out. Since they have to sell this lie, there’s not much Ben can do. However, it’ll sting for everyone to believe Ciara doesn’t come first in Ben’s life. He’s given Ciara his whole heart and would do pretty much anything for her.

Days of Our Lives spoilers say Shawn will unleash his wrath on Ben, but it’s his own daughter who needs serious help. Claire tried to kill Ciara as well as Tripp and Haley Chen (Thia Megia). As Ciara pointed out, Claire is far sicker than any of them thought possible. Shawn certainly doesn’t think his little princess Claire bear is capable of multiple attempted murders!

Nevertheless, Claire is indeed the culprit and will make a stunning confession to her dad on June 27. Will Ciara break down and admit her crimes? DOOL will drag this out to the following week, so Claire may not give Shawn the full picture here. She may confess something else in another fake-out moment.

Whatever the case, Days spoilers state that Tripp and Claire’s plan will go horribly wrong. This is all building to some dangerous scenes and a shocking exposure – and much heartbreak for a devastated dad. We’ll give you updates as other DOOL news comes in. Stay tuned to the NBC soap and don’t forget to check CDL often for the latest Days of Our Lives spoilers, updates and news.