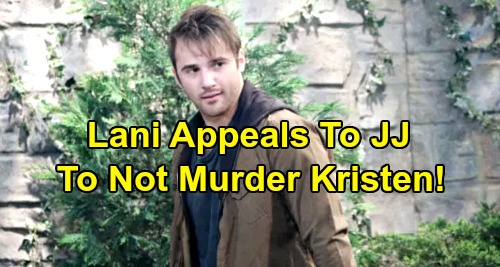 Days of Our Lives (DOOL) spoilers tease that JJ Deveraux (Casey Moss) will be a man on a mission. As DOOL viewers know, he’s been in bad shape lately. He’s clearly not taking care of himself, as he looks dirty and disheveled. And he seems to have a problem with pills as well, which isn’t helping his mood any. All of this stems from his deep depression over losing Haley Chen (Thia Megia) a while back – something that happened during the time jump year.

And as DOOL viewers have learned, Haley died as the result of some accident that was apparently caused by Kristen DiMera (Stacy Haiduk). Viewers aren’t totally in the loop about what happened between Haley and Kristen, but it has been stated on the show that there was an accident and that Kristen was legally cleared of any wrongdoing in the death.

Well, soon JJ will get a big break in his search for Kristen, who is off being a nun in Rome. Exactly how it all comes together remains to be seen, but JJ will end up getting tipped off that Kristen might be in Rome, where he knows that Eli Grant (Lamon Archey) is headed to thwart some plan of Chad DiMera’s (Billy Flynn). According to DOOL spoilers, JJ will trail Eli to Rome and as Eli comes face-to-face with Lani Price (Sal Stowers) at the convent, JJ will find Kristen.

And from there, it looks like there will be a stand-off. JJ was shown in the DOOL winter promo looking upset and pointing a gun at someone, and that’s almost certainly going to be Kristen. It looks like that will be happening at about the same time that Eli and Lani are engaged in their own less violent confrontation.

Well, something will happen to alert Lani that Kristen is in danger, and Lani will end up making a big emotional appeal to JJ about sparing Kristen’s life. Perhaps when this occurs, DOOL viewers will finally learn the details about what Kristen did that ended up killing Haley. We may see Lani plead with JJ to put the gun down and not ruin his life by taking Kristen’s.

At any rate, Lani will probably end up being successful in standing JJ down, or perhaps he’ll be subdued by Eli or in another way, as it doesn’t look like Kristen is going to be seriously harmed throughout the ordeal. But one does wonder whether JJ will ultimately come to accept that Haley’s death was an accident and that Kristen didn’t intend for her to die.

How do you think that Haley died? Stay tuned to DOOL and don’t forget to check CDL often for the latest Days of Our Lives spoilers, updates, and news.