Days of Our Lives Spoilers: Week of December 2 – Eli & Lani Meet in Rome – Stefano On The Loose – Xander Rages at Nicole 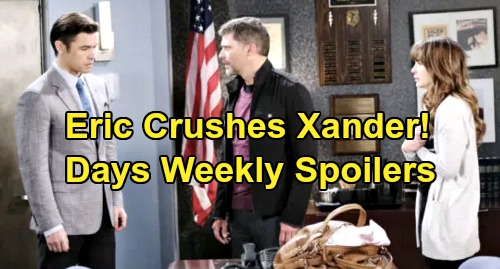 Days of Our Lives (DOOL) spoilers for the week of December 2-6 tease that the action’s about to heat up in Salem. First, “Princess Gina Von Amberg” aka Hope Brady (Kristian Alfonso) will talk to “Stefano DiMera” aka Steve Johnson (Stephen Nichols) about his plans. Stefano’s memories were implanted in Steve, so that’ll present both new challenges and new opportunities.

“Stefano” will have to navigate the world while pretending to be Steve soon enough. It’ll all be part of a scheme regarding Marlena Evans (Deidre Hall), his “Queen of the Night.” Over with Ben Weston (Robert Scott Wilson), he’ll come to Will Horton’s (Chandler Massey) rescue behind bars. Clyde Weston (James Read) lethal plot will leave Ben scrambling to save Will’s life.

Other Days of Our Lives spoilers say Eric Brady (Greg Vaughan) will spell out his terms. He’ll tell Sarah Horton (Linsey Godfrey) he’ll share custody with her, but only if she cuts Xander Kiriakis (Paul Telfer) out of the picture. Eric was willing to tolerate Xander when he thought Mackenzie “Mickey” Horton belonged to him. Now that Eric’s learned about the paternity deception, he’s done putting up with Xander.

Of course, the idea of being shoved aside will be devastating for Xander. He’s bonded with Sarah and Mickey, so Eric’s demand will leave him upset. As for Ciara Brady (Victoria Konefal), she’ll manage to pry open that metal box she stole from Xander. Ciara will get it open and start combing through what’s inside for evidence.

Back with Eric, he’ll hear Nicole Walker’s (Arianne Zucker) desperate plea for forgiveness. Nicole will also face Xander’s fury for spilling the baby beans. Xander will feel like Nicole has ruined his life, but she’ll just think she finally did the right thing.

Days spoilers state that Mickey will come down with a fever later. It may not seem like cause for concern, but it could lead to a crushing diagnosis in the near future. Speaking of the future, that’s what Chad DiMera (Billy Flynn) will be focused on. He’ll keep his eye on the prize as he fights for control of DiMera Enterprises. Chad will hope he can finally get revenge on Gabi Hernandez (Camila Banus) and put the company back in the hands of a true DiMera.

That DOOL mission will take Chad to Rome, where Gabi will send Eli Grant (Lamon Archey) to thwart her enemy’s attack. Eli will wind up bumping into Lani Price (Sal Stowers), who became a nun at a convent over there. Lani will also have a dangerous run-in with JJ Deveraux (Casey Moss), who’ll be ready to pump a bullet in Kristen DiMera (Stacy Haiduk) and won’t want his ex interfering.

In Salem again, Kate Roberts (Lauren Koslow) will be serving up chowder and all the other popular menu items at the pub. Kayla Brady (Mary Beth Evans) will be taken aback by Kate’s career change, but these are hard times! Kate will do whatever she has to do to make some money and support herself.

Next, Days of Our Lives spoilers say Sonny Kiriakis (Freddie Smith) will mull over a kiss. He’ll lock lips with Evan Frears and later wonder how he really felt about it. Finally, Brady Black (Eric Martsolf) will need someone to rely on. He’ll confide in Rafe Hernandez (Galen Gering) and hope he can work through the funk he’s been in.