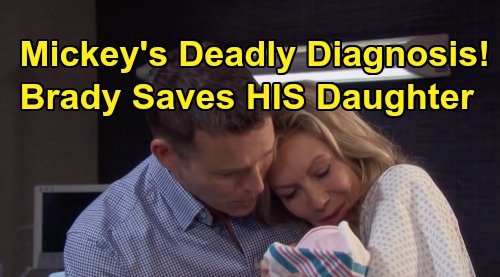 Days of Our Lives (DOOL) spoilers tease that a crisis is ahead for Mackenzie “Mickey” Horton. DOOL fans know Eric Brady (Greg Vaughan) recently found out Mickey is his daughter – or so he thinks. Let’s be real here: It’s obvious a baby swap went down. When two soap women give birth at the same time, that’s almost always the first sign of trouble. The time jump made this part of the story happen offscreen, which makes a baby switch even more likely.

There’s pretty much no way Days would be burning through so many quick revelations without a grander plan in mind. That grander plan likely involves Mickey being revealed as Brady Black’s (Eric Martsolf) child with Kristen DiMera (Stacy Haiduk). Some might say this is a bit of karma for Kristen, who stole Theresa Donovan’s (Jen Lilley) embryo so she could give birth to “Christopher DiMera” aka Tate Black.

That storyline could actually end up being an important part of this one. We’ll give you a little memory refresher on what happened after “Christopher” was born. The baby suffered from a rare genetic disorder called SCID and needed a bone marrow transplant.

Kristen knew a biological relative would be the best shot at a match, so she sent someone back to Salem to steal blood from “Christopher’s” true parents. Melanie Jonas (Molly Burnett) caught Kristen’s minion after he swiped blood from Theresa Donovan (Jen Lilley) and began battling suspicions.

With Nicole Walker’s (Arianne Zucker) help, Melanie realized Theresa hadn’t been faking her pregnancy. That led to Brady and Theresa being reunited with their son after Kristen was tracked down in Italy. “Christopher” was renamed Tate and underwent a successful bone marrow transplant.

SCID is far more prominent in males than females, and the rules about how it’s passed down genetically can get tricky. Nevertheless, it’s bound to jog Brady’s memory if Mickey winds up in need of a bone marrow transplant. It could raise Brady’s suspicions – particularly if he turns out to be a match and becomes the bone marrow donor. Brady might start thinking back to stolen Tate and considering just how sneaky Xander can be. It doesn’t have to be SCID or line up exactly right to get the wheels turning for Brady.

Of course, Xander could find himself in a bind before that happens. If Xander swapped the babies, he’d know that Brady and Kristen would be the most likely matches. Xander loves Mickey enough to confess if it comes to that, but he’d undoubtedly hope for another way out. He wouldn’t want to lose his shot with Sarah if he could help it.

Regardless, Days of Our Lives spoilers say Mickey will battle a fever in the week ahead, which could lead to a far worse diagnosis. During the week of December 9-13, Eric and Sarah will get distressing news about Mickey. It certainly sounds like Mickey will be seriously ill, which could set up a bone marrow transplant story or some other crisis that’ll tie to Mickey’s true bio parents.