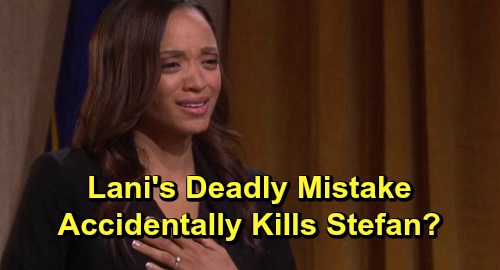 Days of Our Lives (DOOL) spoilers tease that Lani Price (Sal Stowers) will soon face a serious situation on the job. As a detective at the Salem PD, she’s seen her share of crisis situations and she’s dealt with plenty of criminals in high-pressure stand-offs, and she normally keeps her cool. But this fall, she’ll face a serious on-the-job situation that will send her reeling.

In fact, it will be such a serious situation that Lani will consider calling off her wedding to Eli Grant (Lamon Archey). Clearly, something big is going to go down. But what could it be? Well, given the nature of some recent DOOL spoilers, plus the sad truth that Stefan DiMera (Brandon Barash) will soon be exiting canvas, it certainly looks like Lani may wind up shooting and killing Stefan.

Since Vivian Alamain (Robin Strasser) has returned, she’s caused nothing but trouble for Stefan. Her relentless drive to kill Kate DiMera (Lauren Koslow) has been a major problem for Stefan, and the DOOL fall promo showed Lani holding Vivian at gunpoint from behind, with Vivian wearing a cape. Could Stefan possibly step in and try to save his mother after Lani has tracked her as Kate’s assailant, with Lani shooting and ultimately killing Stefan?

That’s certainly one possibility. Days of Our Lives spoilers say that Lani will be shaken when she realizes what she’s done, so that certainly sounds like she may have shot someone and be horrified to realize that she’s responsible for someone’s death. And as DOOL viewers know, there’s been a lot of conflict recently between Lani and Gabi DiMera (Camila Banus). That’s probably not a coincidence, and TPTB could be setting up conflict between the women that will continue on after the shooting.

Of course, it’s been known for a while now that Brandon Barash, who portrays Stefan, will be exiting DOOL sometime this fall. It looks like this could happen in the next couple of weeks, as DOOL spoilers say that Gabi will receive horrific news on Friday, October 4th. The timing would be about right for both the drama with Vivian as Kate’s attempted murderer to come to a head with the police and for Brandon to appear in his final scenes.

Exactly how everything goes down remains to be seen, and TPTB have been pretty secretive about how Stefan will exit canvas. But given that Lani will be terribly upset by something that she’ll do on the job and that Stefan’s on his way out, it seems a pretty safe guess that Lani may ultimately be the person who does Stefan in.

What do you think? Will Lani end up shooting and killing Stefan? Stay tuned to DOOL and don’t forget to check CDL often for the latest Days of Our Lives spoilers, updates, and news.