BY hellodrdavis on November 30, 2019 | Comments: one comment
Related : Days of Our Lives, Soap Opera, Spoiler, Television 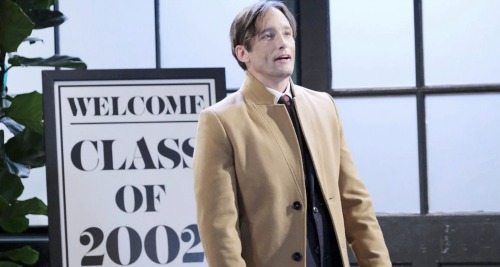 Days of Our Lives spoilers recap for “Last Blast Reunion” Chapter 1, Episode 1 reveal that the Salem high class of 2002 held a very special reunion. The action all got underway on the DOOL app, where you can stream this special series. Chapter 1, Episode 1 dropped today, Friday, November 29, and is all about the “last blast” crew, who were the teen scene back in the 2000s.

The episode began with Chloe Lane (Nadia Bjorlin) and Belle Black (Martha Madison) shopping on Black Friday in New York City. Tired from their day, they decided to stop and eat, and they happened to see a coffee shop nearby called .com which reminded them of the name of the internet cafe they used to go to when they were teenagers in Salem.

Chloe and Belle went inside and enjoyed lattes together, as they discussed Belle’s reason for being in New York, which was official DiMera business. Just then, they heard a familiar voice from behind them – it was Kevin Lambert (Chadwick Hopson), their old friend from high school, welcoming them to his cafe. They shared hugs and were happy to see each other.

Chloe then told Kevin that she lived in New York City now, and that Belle is just visiting for a while and still lives in Hong Kong with Shawn Brady (Brandon Beemer). They marveled that the last time they saw each other was in 2007 at their 5-year reunion. Kevin suggested that they try to get the old crew together – Shawn, Phillip Kiriakis (Jay Kenneth Johnson), and Mimi Lockhart (Teressa Liane).

Chloe reeled at the idea of seeing Mimi again, after the stunt she pulled on Lucas Horton (Brian Dattilo) with “Baby Bonnie” a while back. But Belle brushed aside the incident, saying that Bonnie Lockhart (Judi Evans) had put Mimi up to that. Ultimately, they decided to have a reunion in a week, and Belle worked on sending out invitations.

The action then picked up one week later, with Chloe at her parents’ apartment in New York City. Nancy Wesley (Patrika Darbo) thought that Chloe looked beautiful as she prepared to go to the reunion, while Craig Wesley (Kevin Spirtas) was into his newspaper and could barely be bothered. Nancy asked Chloe if she was nervous about the reunion, given how Jason Welles (Aaron Van Wagner) and Jan Spears (Heather Lindell) bullied her in high school, but Chloe reminded Nancy that Jan was currently in a coma.

Later, at .com. Chloe and Belle gushed at how great the cafe looked for the reunion. Susan Adamson (Lindsay Hollistar), their old friend from high school, then arrived and greeted everyone. Kevin revealed that the whole crew was coming, except for Jan, who Kevin remembered had tried to spill chicken blood on Chloe at one dance, and then projected naked pictures of Chloe at another. They then noted that Mimi was responsible for Jan being in a coma.

And with that, Mimi burst in the door and insisted that “it was an accident,” then exchanged greetings with everyone except for Chloe, who still held a grudge against her for what she put Lucas through. But the two women ultimately decided to be civil to each other and seemed to put their differences behind them. Kevin then decided to show Susan and Mimi around the cafe, while Belle and Chloe stayed behind.

It certainly sounds like the drama is heating up on the DOOL digital series, so stay tuned! The next episode is scheduled to drop on the DOOL app on Thursday, December 5. We’ll give you updates as DOOL news comes in. Stick with the NBC soap and don’t forget to check CDL often for the latest Days of Our Lives spoilers, updates, and news.