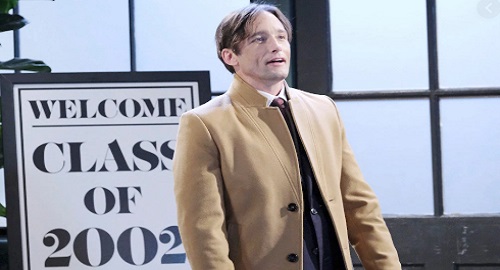 Days of Our Lives spoilers recap for “Last Blast Reunion” Chapter 1, Episode 3, tease that the last blast crew carried on with their New York City reunion at .com, the cafe run by Kevin Lambert (Chadwick Hopson)…all while someone lurked outside the window of the cafe. Susan Adamson (Lindsay Hollistar) surprised everyone with some old-school printed photographs from back in the day, and they marveled at the memories that the photos brought up.

Phillip Kiriakis (Jay Kenneth Johnson) and Chloe Lane (Nadia Bjorlin) found a photo of the Last Blast Dance, and they remembered how Phillip had taken Chloe to that dance, only because he lost a bet to Jason Welles (Aaron Van Wagner). Chloe recalled that she wore a long black cloak to the dance, and via a flashback, she and Phillip remembered the experience, as Chloe removed the cloak to reveal a beautiful red dress, stunning everyone at the dance.

Back in the present, Phillip noted that after that moment, he saw Chloe for who she really was, and they again flashed back to themselves dancing together at the dance. However, Mimi Lockhart (Teressa Liane) interrupted Phillip and Chloe’s moment by yelling across the cafe at Chloe to run to the deli and get more beer for the group. Shawn Brady (Brandon Beemer) ended up getting more beer, while Chloe and Belle Black (Martha Madison) stepped aside for a chat.

Chloe ranted that it seemed to drive Mimi crazy that she was talking privately to Phillip, and Belle noted that there might be something more between Phillip and Chloe, since sparks seemed to be flying between them. Chloe balked a little bit, but it was clear that she was attracted to Phillip, and Belle could sense it. Belle, who was little tipsy, even offered to go find out if Phillip was currently single, but Chloe stopped her.

Finally, the party came to an end, and as Phillip helped Chloe on with her coat, he asked her out for a nightcap. Mimi then barged in and said, “I’d love to,” obnoxiously inviting herself along. Susan was not feeling well, as she’d been having horrible migraines, and was going to try to catch a flight back to Atlanta, and Shawn and Belle headed back to their hotel together.

Kevin stayed behind to close up the cafe, and as he was there by himself, he found a photo on the floor of the whole last blast crew and wondered aloud who had taken it. Just then, someone wearing black gloves ominously entered the cafe. Kevin told the person “we’re closed,” before looking up and saying “it’s you” before the person took a knife and appeared to stab Kevin.