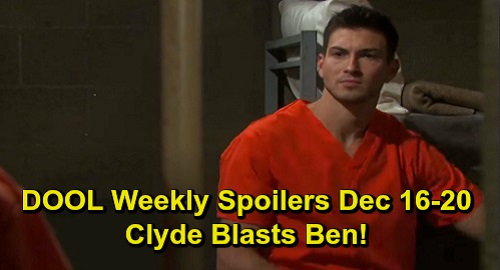 Days of Our Lives (DOOL) spoilers for the week of December 16-20 tease that the drama’s about to heat up in Salem. For starters, Ciara Brady (Victoria Konefal) will be backed into a corner. Xander Kiriakis (Paul Telfer) will be onto Ciara, so he’ll offer a stern warning. It sounds like Xander will push Ciara to back off – or else!

Of course, Ciara will remain determined to get Ben Weston (Robert Scott Wilson) off the hook, but she’ll have to be sneakier about her Xander and Victor Kiriakis (John Aniston) takedown efforts. Over with Will Horton (Chandler Massey), he’ll meet with Sonny Kiriakis (Freddie Smith) and push for details about Evan Frears (Brock Kelly). Sonny will admit he’s been bonding with Evan, so Will’s going to make a painful decision.

In an effort help Sonny move on, Will will ask for a divorce. It’ll be a difficult blow for both of them, but they’re dealing with a rough situation right now. Will and Sonny will ultimately agree a divorce might be for the best.

Next, Rafe Hernandez (Galen Gering) will talk to Abigail DiMera (Kate Mansi) about Hope Brady aka Princess Gina Von Amberg (Kristian Alfonso). They’ll mull over “Hope’s” weird behavior lately and wonder about the reason for it.

Meanwhile, John Black (Drake Hogestyn) will obey Marlena Evans (Deidre Hall) orders and give “Hope” the boot. He’ll officially throw “Hope” out of the townhouse and make it crystal clear that he doesn’t have romantic feelings for her. As DOOL fans can imagine, Princess Gina will fume over John’s refusal to accept her love.

Back with Rafe, his hunt for Dr. Wilhelm Rolf (William Utay) will lead him to Princess Gina’s lair. Rafe will wind up catching “Hope” with a gun as Stefano DiMera aka Steve Johnson (Stephen Nichols) makes a break for it. Nevertheless, Rafe will spot the signs of Stefano and wonder if the Phoenix has indeed risen from the ashes again. He’ll also discover Princess Gina’s tiara and force her to think fast.

Other Days of Our Lives spoilers say Lani Price (Sal Stowers) will do some plotting with Kristen DiMera (Stacy Haiduk). After a spa day in Italy, they’ll be ready to put a sneaky plan in motion. Gabi DiMera (Camila Banus) will never see them coming!

Days spoilers say Abigail will focus on Eli Grant (Lamon Archey) and his questionable feelings for Gabi. She’ll begin to wonder if Eli’s really as in love as he claims to be. Over with Stefano again, it appears he’ll find his way to Kate Roberts’ (Lauren Koslow) room after he evades Rafe. Unfortunately, Roman Brady (Josh Taylor) will show up and battle suspicions about the person Kate’s hiding.

Kate will also face guilt as she chats with Marlena. Once Marlena opens up to Kate about her Stefano concerns, it’ll leave Kate wishing she could tell her friend the truth. However, it seems Kate will keep her mouth shut and let Stefano’s plot play out.

As for Kayla Johnson (Mary Beth Evans), she’ll cross paths with Kate and become incredibly annoyed. Days of Our Lives spoilers say they’ll have a tense encounter, which could set up a reignited war whenever “Steve” is finally out in the open. Kayla isn’t going to like Kate and “Steve’s” connection at all.

At Statesville, Ben will get an earful from his angry father. Clyde Weston (James Read) will blast Ben for his betrayal, but Ben will just focus on being patient and hoping Ciara can get him out of there. Ciara will surely pull it off eventually, but some twists and turns are brewing.

It looks like the excitement’s about to rev up, so don’t miss what’s in store. We’ll give you updates as other Days news comes in. Stay tuned to DOOL and don’t forget to check CDL often for the latest Days of Our Lives spoilers, updates and news.