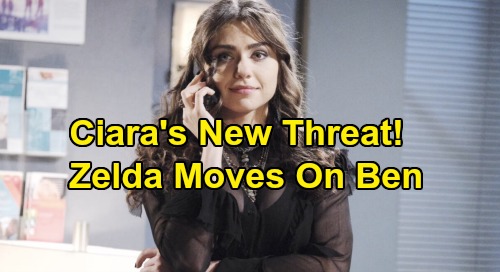 Days of Our Lives (DOOL) spoilers tease that Ben Weston (Robert Scott Wilson) and Ciara Brady (Victoria Konefal) have more obstacles in their future. They’re currently facing their biggest one yet since Ben’s been wrongfully convicted of Jordan Ridgeway’s (Chrishell Hartley) murder. Ben’s on death row, so it’s crucial for Ciara to step up on the outside and clear her love’s name.

Naturally, you can bet Ciara will do just that! She doesn’t want to live in a world without Ben, so she has to keep fighting and make sure Ben walks free. Of course, Days will have to keep the drama going after Ben’s freedom finally comes. He’ll undoubtedly get a brief window of bliss with Ciara, but it won’t be long until another round of trouble strikes. That’s just how it is on a soap!

Thanks to a recently leaked audition tape, we may know what “Cin’s” next curveball is. An actress submitted her audition for the role of Zelda and posted it on Vimeo, but the video’s since been made private. Jason47 posted a transcript, which offers some interesting clues for Days of Our Lives fans.

We should mention that things sometimes change between the time a role is cast and the time it’s filmed. New characters can be renamed, and plot details can be different once they actually hit the screen. However, the main point will probably stay the same. What we’re dealing with here is a troublemaker with her eye on hunky Ben.

In the leaked audition, Zelda repeatedly tries to make her move with Ben. She notes that Ben’s not too dangerous for her, but he contends that Zelda’s too dangerous for him. Zelda doesn’t buy Ben’s act about being hot and bothered for Ciara all the time. Ben insists it’s not an act, but Zelda keeps pushing.

Zelda argues that they both like the view, so she’s eager to make the best of it. Ben doesn’t think that’s a very good way of looking at things. Zelda comments on how not everyone’s childhood is perfect. She assures Ben she’s doing just fine and shuts down his attempts to shrink her.

Zelda isn’t keen on talking and would rather go after what she wants. She knows where to get it, so Ben wonders if she means him or a fix. Zelda insists she doesn’t use every day and tells Ben to chill out. She tries to convince him that this is something they both want, but Ben stands his ground. After Ben maintains he’s not interested, Zelda suggests they’ll see about that.

Obviously, Ben and Zelda aren’t going to become some hot Days couple to root for. Even so, Zelda could try to sabotage his relationship with Ciara – or even target Ciara herself. Ciara may not have real competition for Ben’s heart, but it definitely sounds like a threat’s brewing down the road. DOOL fans won’t want to miss what’s in store!