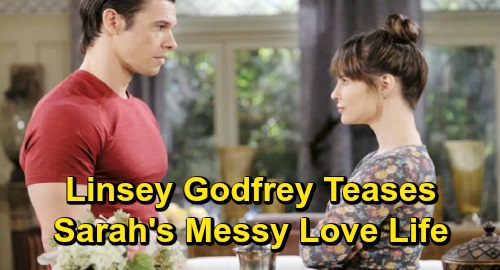 Days of Our Lives (DOOL) spoilers reveal that things are getting complicated for Sarah Horton (Linsey Godfrey). Xander Cook (Paul Telfer) is in love with Sarah and would love to keep being a father to Mackenzie “Mickey” Horton, but Eric Brady (Greg Vaughan) is taking back that role. His ultimatum will leave Xander livid later this week, but there won’t be much Xander an do about it.

In a recent issue of Soap Opera Digest, Linsey Godfrey opened up about her character’s love life and the tricky situation Sarah now finds herself in. It’ll be difficult navigating this co-parenting situation with Eric – especially since she kept the truth from him for so long. There’s plenty of tension between them, so Sarah will worry after Eric insists she must cut Xander out of Mickey’s life completely.

Days of Our Lives spoilers say Eric will stand by his demand. He’ll make it crystal clear that this is what it’ll take to share joint custody, and he won’t budge on it. It’ll be a tough blow for Sarah, who’s grown to appreciate Xander’s role in her life as well as Mickey’s.

“She’s built this relationship with Xander and they’ve built this little family and he really thinks of Mickey as his child,” Godfrey said. Although she went on to describe “Xarah’s” bond as “very solid,” she admitted that Sarah intends to put her daughter first here.

“But at the end of the day, she has to do what she has to do and follow Eric’s demands, because if she doesn’t, she can lose custody of her child,” Godfrey insisted. Days spoilers say Xander’s outraged reaction will fill Sarah with even more fear. She’ll fret about Xander provoking Eric and making matters worse, but he’ll ultimately cool off and decide he wants to put Mickey first, too.

DOOL spoilers say Xander won’t want to risk separating this mom and her baby girl. He’ll choose to step aside, which will please Eric and ensure that Sarah will remain with Mickey – at least for now. Godfrey admitted that it’s hard for Sarah because she has genuine feelings for Xander and enjoys having him around. Xander’s sacrifice will touch Sarah’s heart and is only going to make her love him even more.

As for Sarah’s relationship with Eric, Godfrey promised it would continue to be complex. She suggested there’ll always be some level of affection between them, but she doesn’t believe Sarah and Eric are truly meant to be. “I don’t think Eric was ever in love with Sarah because he was always in love with Nicole,” Godfrey confessed.

Of course, there’s one thing Godfrey didn’t talk about in her interview, which is a big twist that’s most likely brewing. Days of Our Lives spoilers hint that a baby swap probably went down, so Sarah and Eric may have some heartbreak headed their way. There’s a good chance Mickey is actually Kristen DiMera’s (Stacy Haiduk) daughter with Brady Black (Eric Martsolf).

It sounds like some Salem shockers and shakeups are looming. We’ll give you updates as other Days news emerges. Stick with DOOL and don’t forget to check CDL often for the latest Days of Our Lives spoilers, updates and news.