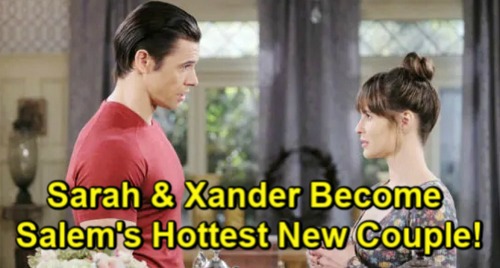 Days of Our Lives spoilers tease Sarah Horton will get her heart broken. When Eric Brady (Greg Vaughan) runs off to find Nicole Walker (Arianne Zucker) and little Holly, who will give her comfort? Actress Linsey Godfrey recently spoke about Sarah and Xander (Paul Telfer) on the official DOOL app.

Shortly after Sarah returned to Salem, Rex Brady’s (Kyle Lowder) extracurricular activities were exposed. He even fathered Mimi Lockhart’s (Farah Fath) baby. This broke the couple up and as a result, Sarah ran straight into Xander’s arms. Although she said it was a mistake, Xander doesn’t feel that way at all. She really did a number on him and he’s been obsessed with Sarah ever since.

Days of Our Lives spoilers reveal Sarah is bouncing from man to man. Now, available guys are in short supply in Salem. After all, it is a small town with three core families, which means many people are related to one another.

Is A Three-Way, Who’s The Daddy Storyline On Its Way?

However, what is more concerning is how many beds Sarah has jumped into in such a short period of time. After Eric breaks Sarah’s heart, expect her to have a conversation with Xander. It is only a matter of time before the two get intimate again and if she gets pregnant, that will make for a three-way who’s the daddy storyline!

With so much focus being put on Xander and Sarah’s relationship, it is clear that the writers are setting “Xarah” up as a couple. The first time was just a one-night stand, but they could have a second chance after Eric runs to Chicago to find his one true love – Nicole.

During an interview, Linsey Godfrey couldn’t confirm or deny the theory of “Xander.” However, she did hint that they could eventually be a hot item. It was written all over her face.

Even though many fans hate Xander and despite the idea of him being with goody-two-shoes Sarah, this could be a good thing. Sarah is always trying to do the right thing, but it doesn’t make her controversial or complicated enough to be interesting.

Could Sarah Horton Go From Fear And Loathing To True Love?

Then there is Xander, who is a bad boy. Definitely considered a villain, there are clues that his character might be morphing into something less evil. Take for example him opening up to Maggie (Suzanne Rogers) about his childhood and trying to be helpful when she relapsed. Good characters have both good and bad parts to them.

Just imagine if Xander and Sarah became an official couple. Xander could rub off on her, making her just a little bit bad. At the same time, Xander will want to please and impress Sarah and will try to do some good deeds. It could end up becoming the perfect match — They would balance each other out.

What do you think will happen with Xander and Sarah? Is she lying to herself about hating the villain so much? Could they be Salem’s next hottest couple, if it’s planned just right? Stay tuned to DOOL and don’t forget to check CDL often for the latest Days of Our Lives spoilers, updates and news.