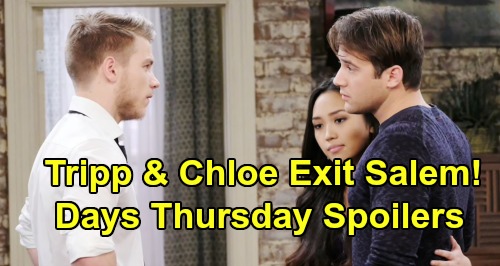 Days of Our Lives (DOOL) spoilers for Thursday, August 29, tease that it’ll be time for two big exits. First, let’s talk about Tripp Dalton (Lucas Adams). He’s been dealing with his growing feelings for Haley Chen (Thia Megia), but she’s in love with JJ Deveraux (Casey Moss). Tripp isn’t eager to cause problems for the two of them, so getting out of their orbit is for the best.

It turns out Tripp will use this as an opportunity to focus on his future. He’ll decide to attend medical school out of town, so he’ll meet up with Kayla Johnson (Mary Beth Evans) to fill her in. Days of Our Lives spoilers say Kayla will let Tripp know she’s proud of him. She’ll be certain Steve Johnson (Stephen Nichols) would be proud of his son, too. After a sweet goodbye, Tripp will head out of Salem and begin his new chapter.

Over with Chloe Lane (Nadia Bjorlin), she’ll concentrate on a new chapter of her own. Chloe recently mentioned an audition in New York, so that should come into play on Thursday’s DOOL episode. It sounds like Chloe got the gig, but it’ll mean leaving Salem ASAP. Days spoilers say Chloe will give Brady Black (Eric Martsolf) updates on this life-changing offer and bid him farewell.

Next, Eric Brady (Greg Vaughan) will make a desperate plea. He’s not sure he buys Kristen DiMera’s (Stacy Haiduk) claims about Nicole Walker (Arianne Zucker) being alive, but he has to find out if she’s right. Eric will beg Melinda Trask (Laura Kai Chen) to cut a deal with Kristen, but she’ll be hesitant since she just got the DA position back. She won’t want to seem like she’s soft on crime.

That’ll leave Eric to beg Jack Deveraux (Matthew Ashford) as well. Days of Our Lives spoilers say Eric will just want some answers, and the only way to get those is to grant Kristen full immunity. Jennifer Horton (Melissa Reeves) will do whatever she can to convince Jack it’s the right call. Across town, Sarah Horton (Linsey Godfrey) will find herself depressed and worried all over again. She just keeps going in circles with all this Nicole and Eric stuff.

It looks like Xander Cook (Paul Telfer) will point out that out on Thursday. He’ll push Sarah’s buttons when it comes to her relationship with Eric, so she’ll fire back and make this quite the confrontation! We’ll keep you posted as other Days news comes in. Stay tuned to DOOL and don’t forget to check CDL often for the latest Days of Our Lives spoilers, updates and news.