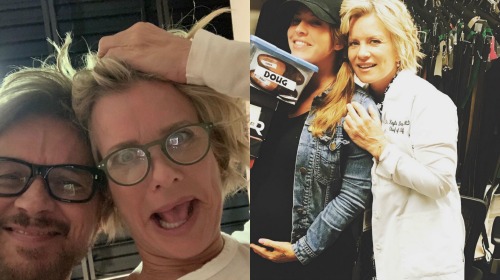 Days of Our Lives (DOOL) spoilers tease that Steve Johnson (Stephen Nichols) and Kayla Johnson (Mary Beth Evans) have more issues in their future. Even supercouples like “Stayla” come with ups and downs. We’re stuck in a “down” period for the formerly happy duo right now – and it looks like things are going to get worse.

During a recent chat with Adrienne Kiriakis (Judi Evans), Kayla opened up about feeling stuck. She’s struggling for several reasons related to Steve’s absence. For starters, Kayla blames herself for the ISA security leak, which was caused by Steve’s bionic eye. She helped Steve secure this technology, but she was just trying to give her hubby his sight back. There’s no reason for Kayla to hold herself responsible.

Steve was arrested for treason at one point, but now he’s doing undercover work – at least as far as Kayla knows. She doesn’t seem convinced Steve even wants to come home, and she realizes he’d never bail on his latest mission anyway. Kayla doesn’t think they can stay in limbo forever, which led Adrienne to wonder about if a divorce might be looming.

Although Kayla didn’t answer that question, a new pic from the Days studio does. Mary Beth Evans posted a photo on Instagram, which showed her wearing Kayla’s lab coat. It normally features the name “Dr. Kayla Johnson,” but now she’s gone back to her maiden name. The latest coat shows the name “Dr. Kayla Brady,” which tells us a “Stayla” split does happen. Evans also isn’t wearing Kayla’s wedding ring, so that’s more proof.

This is a recent pic, so the road to a reunion could be long and winding. Stephen Nichols has been on set since April, but Steve and Kayla still aren’t back together in terms of what’s being filmed. Days of Our Lives tapes several months in advance, so we’ll just have to be patient as we wait on all these developments to hit the air. However, at least DOOL fans know what to expect for Steve and Kayla.

Of course, “Stayla” will inevitably cycle back around. They always do! Evans posted another fun photo with Nichols on set, so they may still be scene partners. Perhaps Steve and Kayla could try dating again before they ultimately remarry. A fresh start with slow progress might be just what they need to rebuild their romance. Days of Our Lives spoilers say some great drama’s ahead in Salem no matter what!

Are you looking forward to Steve’s return? Do you hope Steve and Kayla find their way back to each other? We’ll give you updates as other Days news comes in. Stay tuned to DOOL and don’t forget to check CDL often for the latest Days of Our Lives spoilers, updates and news.

Omg @alixscott_ 35 weeks and counting 🎉🎉no pregnant gal has worked harder! Thank you for all you do for us!! #getthosefeetup