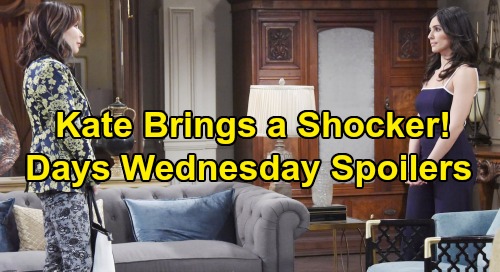 Days of Our Lives (DOOL) spoilers for Wednesday, August 28, tease that Stefan DiMera (Brandon Barash) and Gabi DiMera (Camila Banus) will finally be free. Will Horton (Chandler Massey) and Sonny Kiriakis (Freddie Smith) just opened the door of the secret room, so they witnessed a close “Stabi” moment. That’ll be something they grill Gabi about soon, but the important thing is that Stefan and Gabi can emerge from the DiMera tunnels.

Unfortunately, there’ll be another shocker waiting for them. Days of Our Lives spoilers say Kate Roberts (Lauren Koslow) will approach “Stabi” on Wednesday. She’ll have a major career announcement to make, so Stefan and Gabi had better be ready. Kate will reveal that Mr. Shin (Michael Hagawari) offered her the CEO spot, and she’s decided to take it.

Gabi and Stefan will fume over Kate’s bombshell, but there’s nothing they can do about it. Kate will assure them that the offer is legit and argue this is what Mr. Shin wants. She’ll be moving in the DiMera mansion later this week, so DOOL fans can expect more conflict.

In the meantime, Days spoilers say Ben Weston (Robert Scott Wilson) will get fired. Gabi will decide to cut Ben loose, so she may feel like he should’ve been more vigilant. She might rip into Ben for not watching the grounds properly and not checking down in the tunnels after they disappeared. Whatever the case, Ben will find himself in need of a new job.

This might go down before Kate takes over as CEO, but she’d probably agree with the decision anyway. After what Ben did to Will, Kate wouldn’t be eager to have him around for DiMera security. Over with John Black (Drake Hogestyn) and Marlena Evans (Deidre Hall), they’ll take a breather after the recent party chaos. Marlena and John will just try to enjoy the final hours of their anniversary in peace.

At the police station, Eric Brady (Greg Vaughan) will reel over Nicole Walker’s (Arianne Zucker) survival. He just found out Nicole’s alive along with Holly Jonas (Harlow and Scarlett Mallory), so he’ll confront Kristen DiMera (Stacy Haiduk) on Wednesday. Days of Our Lives spoilers say they’ll have a fierce faceoff, but Kristen won’t be spilling any location details without a full immunity deal.

Finally, Eric will give Sarah Horton (Linsey Godfrey) updates on Nicole. He’ll realize this puts them back in familiar territory: Eric’s true love is alive and he has a chance to be with her. He may fight his feelings for now or at least delay a lengthier conversation, but Sarah and Eric will have to address this by the end of the week.

It sounds like some great drama’s ahead in Salem. We’ll keep you posted as other Days news comes in. Stay tuned to DOOL and don’t forget to check CDL often for the latest Days of Our Lives spoilers, updates and news.