Days of Our Lives Spoilers: Maggie Back On The Bottle – Brady Finds Her Passed Out Drunk

BY hellodrdavis on May 15, 2019 | Comments: one comment
Related : Days of Our Lives, Soap Opera, Spoiler, Television 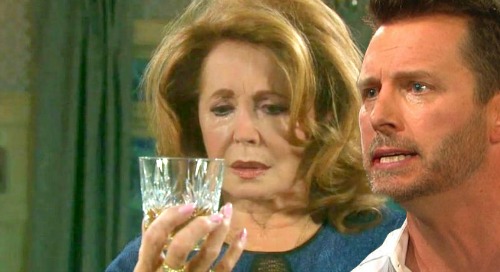 Days of Our Lives (DOOL) spoilers tease that Maggie Kiriakis (Suzanne Rogers) is facing an unbelievable loss. She’s really struggling with her granddaughter Holly Jonas’ (Harlow and Scarlett Mallory) death. As DOOL viewers know, Holly was allegedly killed when the van she was riding in went off a cliff, then exploded. And Maggie is having a really tough time with it.

Of course, Holly was Daniel Jonas’ (Shawn Christian) daughter, and Maggie suffered Danie’s tragic death several years ago. Since Holly was one of Maggie’s few remaining links to Daniel, that makes her death especially difficult.

And as DOOL viewers know, Maggie is a recovering alcoholic, so when tough times hit, one of her first instincts is to drink. She already nearly hit the bottle again when she ordered a vodka at The Brady Pub. Luckily, Nicole Walker (Arianne Zucker) came along and stopped her from imbibing, but it looks like Maggie will face temptation once again.

According to Days of Our Lives spoilers, Maggie will eventually succumb to the urge to drink. Of course, it doesn’t help matters any that Victor Kiriakis (John Aniston) is offering her virtually zero support during this difficult time. The man who should be there by her side comforting her has been more interested in hanging out with Kate DiMera (Lauren Koslow) than supporting his wife.

With stress mounting and no emotional support from Victor, Maggie will drink again. And unfortunately, it doesn’t look like it will be just one drink. DOOL spoilers say that Brady Black (Eric Martsolf) will find his friend totally passed out drunk. There won’t be much that he can do for her in that state until she sleeps it off and wakes up.

And at that point, some decisions may have to be made. Since Maggie drank to the point of being passed out, she might want to consider treatment or rehab. Hopefully, Brady will be able to offer her support and comfort, since Maggie has been there for Brady on numerous occasions when he fell off the wagon.

It’s a terribly unfortunate situation for Maggie. Do you think that Victor will become more supportive once he sees how desperate things are becoming for Maggie? Stay tuned to DOOL and don’t forget to check CDL often for the latest Days of Our Lives spoilers, updates, and news.