Days of Our Lives Spoilers: Monday, April 22 – Ben Bursts in to Save Ciara – Kate Gets a Clue – Gabi and Stefan’s Passion Erupts 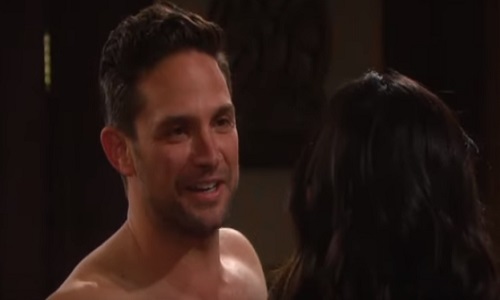 Days of Our Lives (DOOL) spoilers for Monday, April 22, tease that Ciara Brady (Victoria Konefal) will try to talk her way out of trouble. Hector (Osvaldo DeLeon) took Ciara to a motel room, but he knows the cops are closing in. He’s running out of options, so he made the desperate decision to point a gun at Ciara’s head and bid her “hasta luego.”

Ciara obviously doesn’t want to die, but Hector doesn’t look like he’s in the mood to compromise. Nevertheless, Ciara will hope to keep him talking long enough for Ben Weston (Robert Scott Wilson) to arrive. She’s counting on Ben to find the clues she left behind and make it to her before Hector pulls the trigger.

Thankfully, Ben and Hope Hernandez (Kristian Alfonso) indeed found the earrings Ciara planted for them. They’re hot on Hector’s trail, but they’ll split up for now. That’ll leave Ben without backup when he bursts in the motel room to save Ciara’s life.

Days spoilers say Ben will be knocked to the floor during the confrontation that ensues. He’ll end up unconscious with a few gashes, so Ciara will certainly worry about him. Ben’s going to be just fine, but Ted Laurent’s (Gilles Marini) world is getting more complicated. He’s juggling some big secrets and will continue to stay tight-lipped as he manipulates Hope.

DOOL fans can expect Rafe Hernandez (Galen Gering) to dig into all this. Eli Grant (Lamon Archey) will keep an eye on Ted as well, so hopefully they can uncover some shockers soon. In the meantime, Kate Roberts (Lauren Koslow) may be able to pitch in. Days of Or Lives spoilers state that Kate will listen in on Ted’s phone conversation, so she’ll be curious when she hears Chloe Lane (Nadia Bjorlin) mentioned.

Across town, Gabi Hernandez (Camila Banus) and Stefan DiMera (Brandon Barash) will heat things up. Days of Our Lives spoilers say they’ll head to the bedroom for a sex session, so lust will take control. Stefan and Gabi will even go for another round in the morning. They’ll find each other irresistible in these steamy scenes, so Gabi will be torn between her scheme and her complex feelings.

It sounds like an exciting episode’s coming up. We’ll give you updates as other Days news emerges. Stick with DOOL and don’t forget to check CDL often for the latest Days of Our Lives spoilers, updates and news.