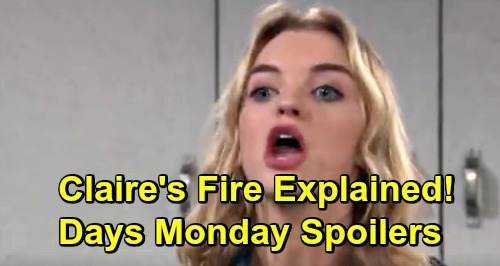 Days of Our Lives (DOOL) spoilers for Monday, February 25, tease that we’ll learn more about why Claire Brady (Olivia Rose Keegan) resorted to attempted murder. DOOL just showed a fake flashback that revealed Claire as the person who started the original cabin fire. Of course, that’s just Claire’s dirty little secret for now. She’ll hope she can keep that news to herself and find a way to move forward.

Days fans will recall that Claire was obsessed with Tripp, even back then. It looks like she was willing to burn Ciara to eliminate the competition! Naturally, many viewers aren’t happy about this twist. It seems awfully extreme since Claire has never taken her schemes that far before. 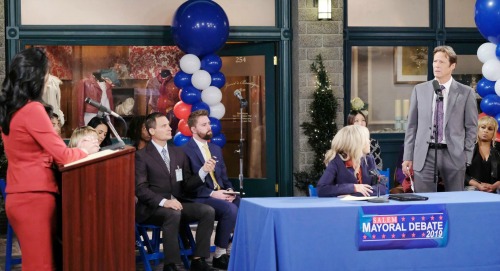 Despite her petty plots and constant jealousy, Claire loves her aunt deep down. It doesn’t make sense for her to nearly kill Ciara. Nevertheless, that’s exactly what Claire did. This leaves fans with an important question though. How did Claire track Ciara down long before the Salem PD? Let’s hope Days of Our Lives will explain how Claire ended up at the cabin to make that fateful decision.

Meanwhile, Hope Hernandez (Kristian Alfonso) will swallow her pride and deliver an apology. She’s made plenty of accusations about Ben’s behavior, but none of them have panned out. Ben’s proven himself time and time again, so Hope will recognize that maybe he’s changed. She’ll still be concerned about Ciara and Ben’s relationship, but she’ll accept that Ben’s not quite the threat he used to be.

Other Days of Our Lives spoilers say Jack Deveraux (Matthew Ashford) will cause chaos at the mayoral debate. While Melinda Trask (Laura Kai Chen) goes up against Abe Carver (James Reynolds), Jack will step forward and reveal that Melinda’s sister is an undocumented immigrant. The shocker will certainly shake up this big event.

Melinda will try to shut down Jack’s claims immediately. She’ll deny even having a sister, but that excuse won’t fly for long. Moderator Jennifer Horton (Melissa Reeves) will end the debate on the spot and rant at Jack for outing Haley Chen (Thia Megia). She’ll think this has Eve Donovan (Kassie DePaiva) written all over it. Jennifer just won’t understand why Jack’s letting Eve manipulate him like this.

Days spoilers say Jack’s move will bring major backlash, so stay tuned. We’ll give you updates as other details emerge. Stick with DOOL and don’t forget to check CDL often for the latest Days of Our Lives spoilers, updates and news.