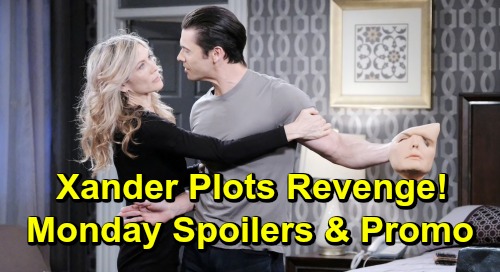 Days of Our Lives (DOOL) spoilers for Monday, July 15, tease that Stefan DiMera (Brandon Barash) will battle confusion. Ted Laurent (Gilles Marini) and Kate Roberts (Lauren Koslow) accused Stefan of kidnapping them right as he walked in. Once he makes sense of what’s going on, Stefan will vehemently deny the accusations. He won’t understand why Kate and Ted would claim he held them hostage.

Stefan will insist he had no idea anyone was down in the DiMera tunnels, but Hope Brady (Kristian Alfonso) should take him into custody anyway. Of course, DOOL fans know Kristen DiMera (Stacy Haiduk) is the real culprit here. She convinced Kate and Ted to lie in exchange for their lives, so they’ll try to keep their story straight and avoid stirring up more trouble.

Meanwhile, Xander Cook (Paul Telfer) will fume over his own arrest. He’ll be hauled down to the police station, so he’ll be absolutely livid over Kristen’s betrayal. She protected herself through her deal with Ted and Kate, but she’s letting Xander fend for himself with the cops. You can bet Xander will get the ultimate revenge soon!

Other Days of Our Lives spoilers say Kristen will get back to her main goal: winning back Brady Black (Eric Martsolf). Once Kristen dons her “Nicole Walker” (Arianne Zucker) mask, she’ll be ready to make another move on her love. “Nicole” will insist Brady should cave in and accept that they’re meant to be together.

After “Nicole” plants a passionate kiss and tries to escalate things, Days spoilers state that Brady will pull back. He’ll refuse to break Eric Brady’s (Greg Vaughan) heart and reignite a war between them. Brady will assure “Nicole” that he’s always going to be there for her, but he’ll think it’s best to stick with friendship and avoid more brother drama.

Over with Lani Price (Sal Stowers) and Eli Grant (Lamon Archey), they’ll discuss their recent engagement. The happy couple will also share their big news with Abe Carver (James Reynolds), so they’ll all have a reason to celebrate. Days of Our Lives spoilers say Abe will be thrilled to see Eli and Lani back on track. He’ll congratulate them and perhaps remind Eli to treat his daughter right.

It looks like some great scenes are coming up on the NBC soap. We’ll give you updates as other Days details emerge. Stay tuned to DOOL and don’t forget to check CDL often for the latest Days of Our Lives spoilers, updates and news.