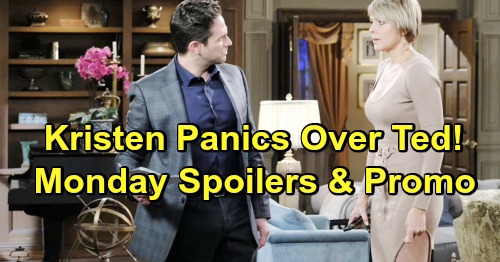 Days of Our Lives (DOOL) spoilers for Monday, June 17, tease that Kristen DiMera (Stacy Haiduk) will have a big problem on her hands – a Ted Laurent (Gilles Marini) sized problem to be exact. Once she realized Ted was on the verge of blowing her plot, Kristen had no choice but to knock Ted out cold. She whacked him with a fireplace poker, but now she has to figure a place to stash him.

Kristen will need some help with this tall order, so she’ll call Xander Cook (Paul Telfer) and demand that he get his butt over there ASAP. Until then, Kristen try to come up with a temporary solution. She’s quite familiar with the DiMera mansion and the tunnels that run through it. Kristen might drag Ted down to a locked bunker – or at least make it happen once Xander arrives to pitch in.

However, Kristen will face a close call in Monday’s DOOL episode. Stefan DiMera (Brandon Barash) and Abe Carver (James Reynolds) will nearly catch “Nicole Walker” (Arianne Zucker) during this cover-up mission, but she’ll ultimately get Ted out of sight before he’s discovered. Days of Our Lives spoilers say that’ll buy Kristen some time until she can figure out a better plan.

Elsewhere, Hope Brady (Kristian Alfonso) will have a chat with Roman Brady (Josh Taylor). They’ll talk about complicated relationships and Hope’s growing feelings for Ted, so Roman’s sure to have some advice. Days fans know Roman is one of Salem’s best sources of guidance, which means Hope should get some words of wisdom on Monday.

Over with Maggie Kiriakis (Suzanne Rogers), her newfound trust in Xander will fade. Brady Black (Eric Martsolf) will do his best to turn Maggie against him, so she’ll end up confronting Xander about his lies.

Maggie will wonder why Xander was dishonest with her about the diary, but he may keep spinning stories and hope she buys it. He has to keep Maggie somewhat on his side if he wants a shot with Sarah Horton (Linsey Godfrey).

Other Days of Our Lives spoilers say Will Horton (Chandler Massey) and Sonny Kiriakis (Freddie Smith) will tie the knot again. They’ll hope an antidote’s developed in time, but they’ll remarry ASAP in case it doesn’t pan out. Will and Sonny now realize they’ve got to make every moment count!

It sounds like another great episode’s on the way. We’ll give you updates as other Days news comes in. Stay tuned to DOOL and don’t forget to check CDL often for the latest Days of Our Lives spoilers, updates and news.