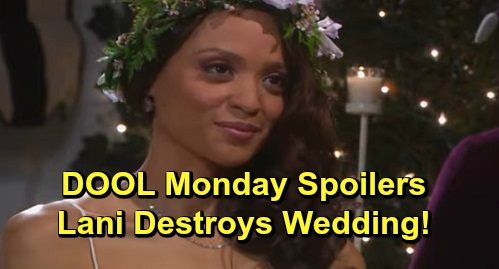 Days of Our Lives (DOOL) spoilers for Monday, November 4, tease that Lani Price (Sal Stowers) will be forced to make a terrible choice. DOOL fans know Gabi DiMera (Camila Banus) is threatening to kill Julie Williams (Susan Seaforth Hayes) with the rigged pacemaker. She’s gleefully awaiting the decision she knows Lani settle on. There’s no way Lani can let Julie die, so she’ll have no choice but to dump Eli Grant (Lamon Archey) at the altar.

It’ll break Lani’s heart to do this, but she’ll think it’s the right call under the circumstances. Days of Our Lives spoilers say Lani will announce her decision and rush off. She won’t be eager to stick around and face all the puzzled stares in the crowd. Lani won’t want to look in Eli’s baffled, devastated eyes either.

However, Eli isn’t going to let Lani dart off without an explanation. Days of Our Lives spoilers say Eli will rush after Lani and demand to know what’s going on. Of course, Lani can’t risk telling Eli the truth. She’ll worry about Gabi following through on her threat, so Lani will give Eli a bunch of vague excuses. When Eli naturally doesn’t buy them, he’ll push Lani to tell him what’s really up.

Days of Our Lives spoilers say Lani will finally blurt out a total lie. She’ll insist she doesn’t love Eli anymore, but he’ll struggle to believe that. Afterward, Gabi will feign confusion and sympathy. She’ll badmouth Lani, but Eli will blow her off and head over to Julie’s room at the hospital. They’ll have a difficult conversation about the failed nuptials and why Lani did what she did.

Julie will feel like there has to be more to the story, so she’ll urge Eli to fight for their future. She’ll hope there’s still a chance for Eli and Lani to work things out. Meanwhile, Justin Kiriakis (Wally Kurth) and Adrienne Kiriakis (Judi Evans) will make their own plans for the future. They’ll prepare for a double wedding with Jack Deveraux (Matthew Ashford) and Jennifer Horton (Melissa Reeves) later in the week.

Other Days spoilers say Marlena Evans (Deidre Hall) will deliver a warning. Sarah Horton (Linsey Godfrey) already got one from Maggie Kiriakis (Susanne Rogers), but Marlena will want to chime in here, too. She’ll insist it isn’t a good idea to date Xander Cook (Paul Telfer), so Sarah will probably give the same old spiel.

Xander is slowly winning Sarah over, but she’ll remain denial about that for now. Sarah may assure Marlena that she knows how to handle Xander and can keep him at arm’s length. It sounds like some hot drama’s ahead, so don’t miss what’s in store. We’ll give you updates as other Days news comes in. Stay tuned to DOOL and don’t forget to check CDL often for the latest Days of Our Lives spoilers, updates and news.