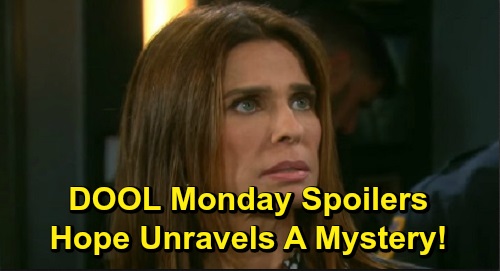 Days of Our Lives (DOOL) spoilers for Monday, October 14, tease that Nicole Walker (Arianne Zucker) will have a sweet conversation with Eric Brady (Greg Vaughan). They’ll take stock of how far they’ve come and most likely reiterate that it came at Sarah Horton’s (Linsey Godfrey) expense. Nicole hates that Sarah had to suffer, but she’s glad Eric chose her instead.

Of course, there was really no choice at all in Eric’s mind. Nicole has always been his true love, so Eric just followed his heart. After Eric heads out, Dr. Wilhelm Rolf (William Utay) will arrive to carry out Xander Cook’s (Paul Telfer) plan. Xander has decided to spill the baby beans to Eric, but he can’t let Sarah know he’s the one responsible.

That’s where the sneaky DiMera doc comes in. Days spoilers say Dr. Rolf will tell Nicole he’s got a delivery for Eric. She’ll admit Eric isn’t there, so Dr. Rolf will just leave behind the envelope. Naturally, that’ll leave Nicole tempted to open it. She’ll ultimately surrender to temptation and pull out Sarah’s positive pregnancy test results, so DOOL fans will want to stay tuned.

In the meantime, Days of Our Lives spoilers say Xander will have a fantasy, which might involve envisioning a life with Sarah. Xander may imagine helping Sarah raise her baby and getting the happiness he craves. It looks like Xander will eventually decide it was a mistake to give Dr. Rolf that envelope. Unfortunately, the secret will be in Nicole’s hands before Xander can undo his mistake.

Over with Anna DiMera (Leann Hunley), she’ll push Tony DiMera (Thaao Penghlis) to pop the question. Days of Our Lives spoilers say Anna will be ready for their happily ever after, but will Tony propose like she wants? Whether Tony does it on the spot or surprises Anna later, there’s a good chance these two will indeed start planning their wedding soon.

Finally, Hope Brady (Kristian Alfonso) will remember bits and pieces of what Dr. Rolf did to her. She’ll have a few memory flashes and ponder what they mean. Hope will unravel a wild mystery as this hot plot moves along, so don’t miss all the action. We’ll give you updates as other Days news comes in. Stick with DOOL and don’t forget to check CDL often for the latest Days of Our Lives spoilers, updates and news.