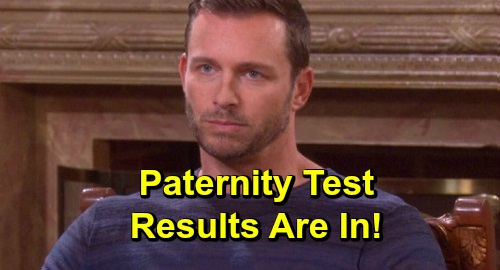 Days of Our Lives (DOOL) spoilers tease that Brady Black (Eric Martsolf) will await some huge news. DOOL fans know Kristen DiMera (Stacy Haiduk) is pregnant, so that’s really turned Brady’s life upside down. He was already having a hard time resisting Kristen, but now he has a legitimate reason to remain in her life. It’ll make it even more difficult to avoid temptation.

Victor Kiriakis (John Aniston) expressed doubt that the baby even belonged to Brady. He was mostly just outraged and seemingly looking for any way to get Brady out of this mess. Nevertheless, Brady acknowledged the fact that it was probably his kid. He realizes Kristen is obsessed with him, so it’s reasonable to believe her claims that he’s the only man she slept with.

If Days goes by what they’ve shown onscreen – and we think they will – Kristen is indeed telling the truth. This is the miracle baby she always wanted with Brady. Even so, there may be a tiny piece of Brady that’s clinging to hope that Kristen’s lying. He’s not afraid to step up as a dad, but we’re talking about a little human that will tie Brady to Kristen forever. Forever is an awfully long time!

Brady may worry that he can’t fight temptation indefinitely. Once he finds out for sure the baby’s his, there’ll be no turning back. During the week of October 21-25, Days of Our Lives spoilers say Brady will get the paternity test results. He’ll nervously open them up and read whether or not he’s the father of Kristen’s child.

Of course, it’s possible the test could be tampered with. Someone like Victor would have a motive to do that. However, it would be pretty pointless since Kristen would move heaven and earth to make sure Brady got the right results. Kristen will have a trustworthy lab tech run everything right in front of Brady if she has to. This is Kristen’s best shot at a future with Brady, so she has no intention of letting it slip away.

There’s a good chance the results will confirm Brady’s going to be a proud papa again. Will this bring a surprising turning point for Brady? Part of him may realize just how much he’s starting to want this kid. Brady rarely gets to spend any time with Tate Black, who lives with Theresa Donovan (Jen Lilley) out in California. He has an opportunity to start over with a mother who definitely wants him in this child’s life.

Brady will inevitably let go of the idea that he can resist Kristen. He may even begin to believe Kristen’s changing for the better thanks to this baby. Unfortunately, Kristen’s bound to cause more turmoil down the road.

The time jump may reveal some manipulation – like a baby switch after a stillbirth or something along those lines. After all, Sarah Horton’s (Linsey Godfrey) pregnant at the same time, and that’s a serious red flag. Days of Our Lives spoilers say Kristen could be backed into a corner eventually, so chaos may be brewing.

It sounds like some big bombshells are coming up in Salem. We’ll give you updates as other Days details emerge. Stay tuned to DOOL and don’t forget to check CDL often for the latest Days of Our Lives spoilers, updates and news.