Days of Our Lives Spoilers: Eric & Jennifer Team Up To Stop Jack & Eve’s Wedding – Case of The Disappearing Groom!

BY hellodrdavis on March 31, 2019 | Comments: one comment
Related : Days of Our Lives, Soap Opera, Spoiler, Television 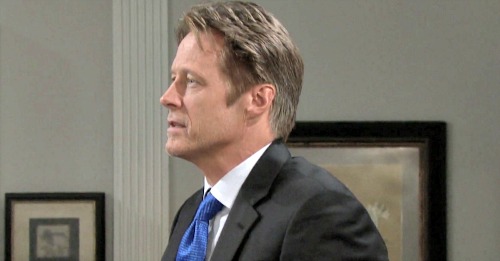 Days of Our Lives (DOOL) spoilers tease that Eric Brady (Greg Vaughan) will soon get caught up in some new drama. He’s been stuck in brooding mode for months now, trying to get over Nicole Walker’s (Arianne Zucker) death and trying to distance himself from Sarah Horton (Linsey Godfrey), whom he’s hopelessly attracted to. And of course Eric’s feud with Brady Black (Eric Martsolf) is always ongoing, giving him even more reason to brood and mope around.

What Eric really needs is a new project, and according to Days of Our Lives spoilers, that’s exactly what he’s going to get. And it will all involve his ex, Jennifer Horton (Melissa Reeves). Jennifer is caught up in some serious drama of her own right now with Jack Deveraux (Matthew Ashford). Jack is hell-bent on becoming mayor of Salem, and he’s got Eve Donovan (Kassie DePaiva) pulling all the strings behind his campaign.

Eve has led Jack to take a strong stance in the community against Haley Chen (Thia Megia), who’s an undocumented immigrant – something that would be uncharacteristic of the “real” Jack Deveraux. Jennifer is horrified at how Eve is manipulating Jack and getting him to do things that she believes are bad for the community and bad for Jack.

And now Days of Our Lives spoilers say that Eve will kick things up a notch and announce that she and Jack are getting married. It will be both a campaign tactic as well as a way to further annoy Jennifer. Jennifer will be devastated, as she doesn’t want to see Jack get drawn further into Eve’s web.

Jennifer will become determined to stop Eve and Jack’s wedding, and at some point Eric will get wind of it. Of course, he and Jennifer used to be a couple before Jack came back from the dead, and the two remain on decent terms. Eric knows that Jack is the love of Jennifer’s life, and Days of Our Lives spoilers say that he’ll offer to help her stop Eve and Jack’s wedding.

It will be interesting to watch Eric and Jennifer team up again, and good to see them working together and enjoying each other’s company. These two may not have worked out as a couple, but they make good friends, and hopefully Eric can help Jennifer find a way to prevent Eve and Jack from tying the knot.