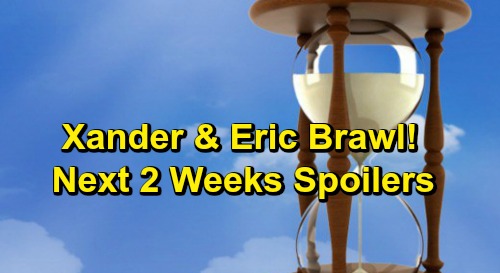 Days of Our Lives (DOOL) spoilers for the next two weeks tease that some schemers will stir the pot. During the week of January 7-11, Xander Cook (Paul Telfer) will meet Leo Stark (Greg Rikaart). It won’t take long for Leo to become smitten with the shirtless black sheep of the Kiriakis family. Leo will also go shirtless for some entertaining scenes, but the end result will be an alliance between them.

While Xander and Leo team up, Haley Chen’s (Thia Megia) surprising connection on canvas will be revealed. She’s related to DA Melinda Trask (Laura Kai Chen) and they’re keeping a huge secret. It’s natural to assume Melinda might be Haley’s mother, but the latest DOOL buzz points in another direction. It looks like Melinda may actually be Haley’s older sister.

Regardless, Melinda will clearly be the one in charge. She’ll snap at Haley this week about what she’s been telling JJ Deveraux (Casey Moss) and Dr. Kayla Johnson (Mary Beth Evans). Melinda will hope that Haley kept her mouth shut and will continue to do so. Whatever Haley’s keeping under wraps could come back to bite both of them.

During the week of January 14-18, Days of Our Lives spoilers say Eric Brady (Greg Vaughan) will spot Xander. Nicole Walker (Arianne Zucker) never would’ve ended up in that warehouse if it weren’t for Xander’s actions. That’s why Eric will unleash his wrath in a big way. He’ll launch a vicious attack, so it sounds like a brawl’s brewing over Nicole’s “death.”

Eric will also have a chat with Rex Brady (Kyle Lowder), who’ll need a favor. He’ll hope Eric can assist with his plan to win back Sarah Horton (Linsey Godfrey). Since Eric already seems to be falling for Sarah, that’ll be tough to agree to. Plus, Eric knows how deeply Rex hurts Sarah. He may not be sure this is a good idea.

However, Days of Our Lives spoilers say Rex will give it his best shot. Later, he’ll make an admission that sense Sarah running in Eric’s direction. It seems this reunion plot won’t work out as well as Rex hoped.

On the bright side, he’ll spend some time catching up with Chloe Lane (Nadia Bjorlin). Maybe Rex will eventually let go of Sarah and focus on the spark he finds with Chloe instead.

Days spoilers state that Rafe will dash off to help his ex, which could give Ted Laurent (Gilles Marini) a chance to make his move! We’ll give you updates as other Days details emerge. Stay tuned DOOL and don’t forget to check CDL often for the latest Days of Our Lives spoilers, updates and news.