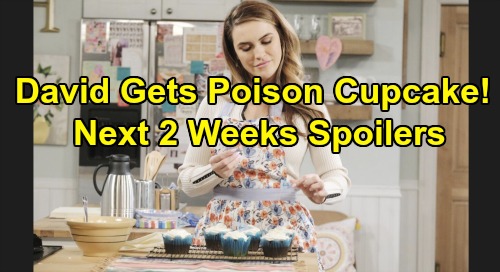 Days of Our Lives (DOOL) spoilers for the next two weeks tease that some sneaky plans will go awry. During the week of October 21-25, Jordan Ridgeway (Chrishell Hartley) will bake cupcakes for David Ridgeway’s birthday party. She invited Ben Weston (Robert Scott Wilson) and Ciara Brady (Victoria Konefal) to the gathering, but that’s only because she intends to plot against Ciara.

As they work in the kitchen, Rafe Hernandez (Galen Gering) will tell Jordan he’s proud of her for taking this first step with Ben. He’ll be glad to see they’re moving forward and getting their brother-sister bond back on track. However, Jordan will secretly inject Ciara’s cupcake with poison. She’ll make sure it’s specially labeled and seem pretty pleased with herself.

After Rafe leaves to attend Stefan DiMera’s (Brandon Barash) funeral, Jordan will babysit Arianna Horton (Harper and Sydnee Udell). Days of Our Lives spoilers say Arianna will give David a cupcake, but Jordan will panic when she realizes it’s the one meant for Ciara. She’ll scramble to get the dessert away from her son, and she’ll manage to do it just in time.

Later, Ciara will eat the cupcake labeled for her. She’ll begin to feel ill later, so Jordan will think her scheme worked out. Unfortunately, Rafe Hernandez (Galen Gering) will end up collapsing later, so maybe there was a little problem with Jordan’s labeling system!

Other Days spoilers say Adrienne Kiriakis (Judi Evans) will spend some time bonding with Jack Deveraux (Matthew Ashford). They’ll reconnect and she’ll be over the moon about him getting his memories back. Adrienne will also be over the moon when Justin Kiriakis (Wally Kurth) pops the question. Jack will have the same idea when he asks Jennifer Horton (Melissa Reeves) to tie the knot.

Over with Gabi DiMera (Camila Banus), she’ll push Lani Price (Sal Stowers) to dump Eli Grant (Lamon Archey) at the altar. Lani will put up a fight on that, but there’s a good chance Gabi will reveal some shocking leverage. During the week of October 28-November 1, Lani will do her best to bargain with Gabi. She’ll be looking for a solution they can both agree on, but Gabi will stick to what she wants.

Later, Tamara Price (Marilyn McCoo) will arrive in Salem for her daughter’s wedding. That’ll rev up the pressure even more for Lani. How can she just ditch Eli right in front of her mom, dad and everyone else? Not only will it be humiliating for both of them, it’ll break Eli’s heart. Nevertheless, Lani may ultimately be forced into this terrible decision.

Meanwhile, Ciara will discover something surprising in Ben’s coat pocket. It’ll seem to be something incriminating, but things aren’t always as they seem. DOOL spoilers hint that Ben should have a good explanation later, but other troubling clues will surface.

Over with JJ Deveraux (Casey Moss), he’ll find himself in Jordan’s way – and that’s never a good place to be! Days of Our Lives spoilers say JJ will be injured after Jordan’s attack. As for Hope Brady (Kristian Alfonso), she’ll be totally transformed into Princess Gina by then. “Hope” will get caught smoking and doing several other out-of-character things that raise red flags.

Xander Cook (Paul Telfer) will think it’s odd when “Hope” doesn’t know him at all. She won’t recognize Xander, so it’ll be a head-scratcher for sure. Xander just won’t understand what’s gotten into “Hope,” but it’ll all become clear in time. We’ll give you updates as other Days news comes in. Stay tuned to DOOL and don’t forget to check CDL often for the latest Days of Our Lives spoilers, updates and news.