Days of Our Lives Spoilers: Gabi Orders Lani to Dump Eli at the Altar – Demands Wedding Destruction and Heartbreak 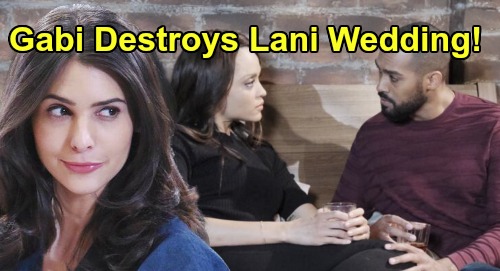 Days of Our Lives (DOOL) spoilers tease that Lani Price (Sal Stowers) will continue to wrestle with her feelings. She was cleared of any wrongdoing through the Salem PD’s investigation, but she obviously still feels horrible. Lani never intended to kill Stefan DiMera (Brandon Barash) that night. She knows Gabi DiMera (Camila Banus) is in a lot of pain right now, and she feels responsible on some level.

At the same time, Lani’s ready to move forward with Eli Grant (Lamon Archey) and enjoy her own happiness. Stefan made his choice when he dove in front of the bullet to save Vivian Alamain (Robin Strasser). It’s not Lani’s fault that Stefan made that decision, but Gabi can’t see beyond her grief right now. She’s looking for someone to blame, and DOOL fans know Lani is the most logical target.

During the week of October 21-25, Days of Our Lives spoilers say Gabi’s rage toward Lani will intensify. Lani and Eli will attend Stefan’s funeral, which Lani won’t be sure is the best idea. Nevertheless, she’ll let Eli talk her into it. He’ll feel like they have to show Gabi their support, so they’ll be there getting glares from the grieving widow.

Afterward, Days spoilers say Gabi will bump into Lani at the hospital. She’ll gush about how great it is that Lani and Eli are tying the knot, which will leave Lani suspicious. It’ll be a huge shift for Gabi, so Lani will know something isn’t right. That’s when Gabi will make a startling demand. She’ll insist that Lani needs to go through all the wedding motions and dump Eli at the altar!

Naturally, Lani will be in total disbelief here. She’ll think Gabi can’t possibly believe she’d hurt Eli like that. However, Gabi will be quite serious about this outcome. She’ll want to blow up “Elani’s” relationship like Lani blew up hers. Gabi will push Lani to ditch Eli on their wedding day and shatter his heart.

We have to wonder about Gabi’s leverage. It’s not like Stefan’s heart will be ripped out of Julie Williams’ (Susan Seaforth Hayes) body. The gift has already been given, so why should Lani take orders? Guilt trips can be pretty powerful on soaps, but there may be more to the story.

After vowing to run DiMera Enterprises exactly how Stefan would, Gabi called Visionary Bionics about Julie’s pacemaker and special procedure. She may plan to get ahead of this so she gets to decide if Julie receives what she needs. Gabi could potentially still determine whether Julie lives or dies. She may even be able to control that pacemaker – much like Steve Johnson’s (Stephen Nichols) bionic eye could be controlled. That could certainly force Lani to go along with Gabi’s plot.

Days of Our Lives spoilers say Lani will eventually seek a deal with Gabi. She’ll hope they can reach some sort of compromise. Perhaps Lani will agree to dump Eli – but not at the altar. It’s doubtful that’ll work for Gabi, so Lani will have to decide what she’s going to do.

DOOL viewers can expect this wedding to kick off during the week of October 28-November 1, but will it be completed? Since Gabi and Eli are reportedly set to be an item after the time jump, it sounds like Lani may cave in. We’ll give you updates as other Days news emerges. Stay tuned to the NBC soap and don’t forget to check CDL often for the latest Days of Our Lives spoilers, updates and news.